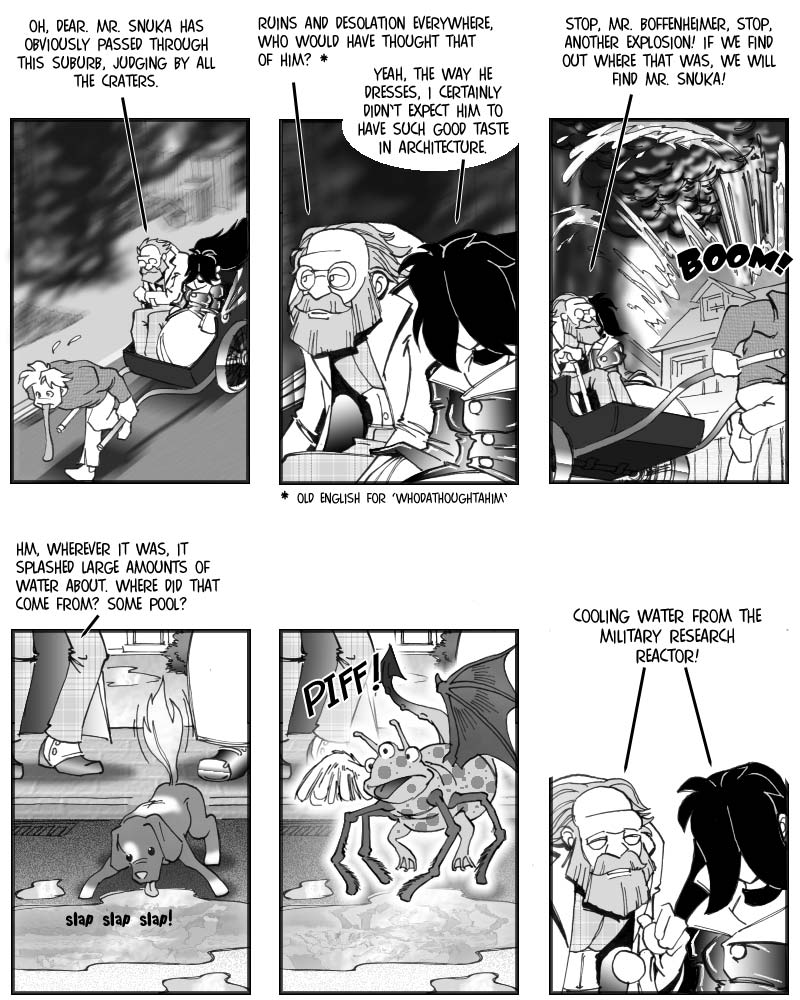 And today’s lesson is: If you like your body the way it is, don’t drink water that has leaked from a nuclear reactor’s cooling cycle. And that’s really good advice, even if the kind of mutation shown in panels four and five is exclusive to B-movies and superhero comics. In real life, just a little sip of mildly radioactive water isn’t really going to turn you boring, plain dog into something interesting, sorry. But in movies, and comics, there are just no limits to what mutation can do, or what can cause mutation…being bitten by a radioactive spider can give you fantastic powers and weird personality issues, and nuclear tests can cause a harmless, giant, carnivorous dinosaur to turn into a sometimes benevolent, giant, nuclear steam breathing, heavily scarred, carnivorous…uh, man in a rubber suit…uh, moving on.

Or take ‘Beast of Yucca flats’, for example – after being subjected to radiation from a nuclear test (I *guess* it was a nuclear test…or perhaps a zoning dispute spun out of control?) Tor Johnson stumbles around as a deformed, insane monster in tattered clothing…before the explosion, he had been a deformed, insane monster in a badly fitting suit- what a terrible change.

Naturally, the fashions of monster creation have their own cycles to them. Before the 20th Century, you’d normally use the good old black magic shtick to create or summon monsters. Around the fin de siecle, alchemy slowly gave way to chemistry, although it’s not easy to spot the difference. By the thirties, Dr. Frankenstein lead the way with his innovative use of electricity, back then the mirage of the age. Come the fifties, everybody went with the glowing new miracle drug, radioactivity. Then, in the seventies, chemistry was back in vogue, usually applied in the form of illegal waste disposal by irresponsible corporations. And by the nineties, quite a few had gone back to the good old black magic shtick… I wonder what the first major trend of the new Millenium will be, in that regard…turned into mindless zombies by brand awareness?

By B-movie standards, the conclusion draw by the Professor and Mopey in panel six is not at all far-fetched. Explosion -> Water -> Mutation -> Reactor…that’s highly logical and plausible, compared to most. An average B-movie script would just call for the Professor to show up at the reactor, saying something like : ‘When I saw the destruction in the suburbs, I knew you’d be here’ without *any* actual explanation. =P

On Monday, it’s a quick glance at what the invisible killer is doing…well, as far as he can be glanced at…

And, last but not necessarily or irrevocably least: a new voting incentive. It features Harry Potter, but also the probably most popular minor character from the first chapter of BMC. At least he was my favourite.