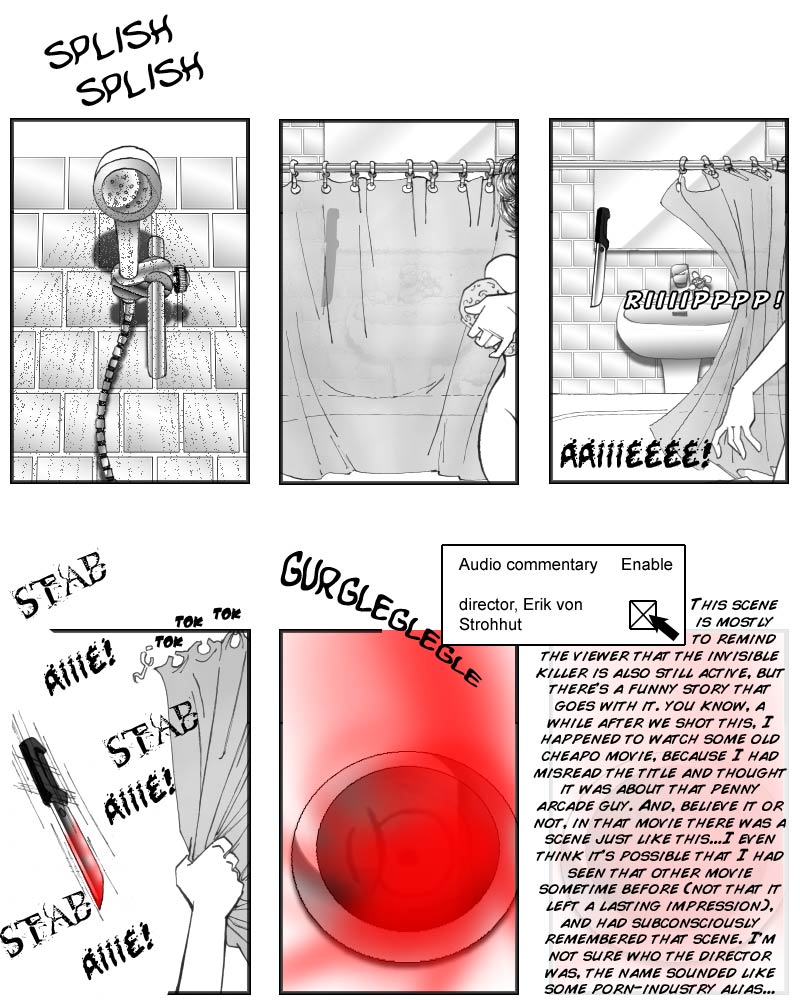 In case you noticed anything strange going on here between Aug. 20th and 27th, you might want to look here.

Now, as far as today’s episode is concerned, this scene is mostly to show how well versed Erik, our director, is in all things movie, and in which high esteem he holds the venerated masters of the art.

Of course, directors *never* plagiarize. When any (or all) scenes in a newer movie resemble an older one, it’s either because the director has been ‘subconsciously influenced’, or it’s a conscious ‘homage’. I wonder that the videogame industry hasn’t yet caught on to that kind of wording…‘We were so impressed by Futile Fantasy XXXVIII that we published a homage…it’s the same game, we just colour-swapped the sprites and changed some of the names. And we called it Fantastic Futility. And added some Roman numerals, just for the heck of it.’ By the way, a homage is not the same as a remake – a remake is when you take an old movie and make a newer, inferior version of it, or when you slap an older movie’s title onto a vaguely related newer one for marketing reasons.

Naturally, B-movie land has it’s own ways of keeping the memories of past legends alive – for example by randomly adding ‘Frankenstein’ to a movie’s title. This is considered justified when any of the movie’s characters resembles the original Frankenstein by being: -an artificially created man -a deformed/disfigured man -any kind of man -OK, or a woman, if she looks a bit manly… Even if none of the conditions are met, you can still add the name to the title, but that’s considered poor form.

For the sake of authenticity, our invisible killer switches back to his trusty, old knife for this scene, from the axe he had used lately…or consider it a continuity fault, after all, it’s a B-movie. Next time around, he’ll be using the axe again.

Speaking of next time, it’s back to the Professor, Mopey and Biff on Thursday, still en route to the site of the nuclear disaster. Please vote.