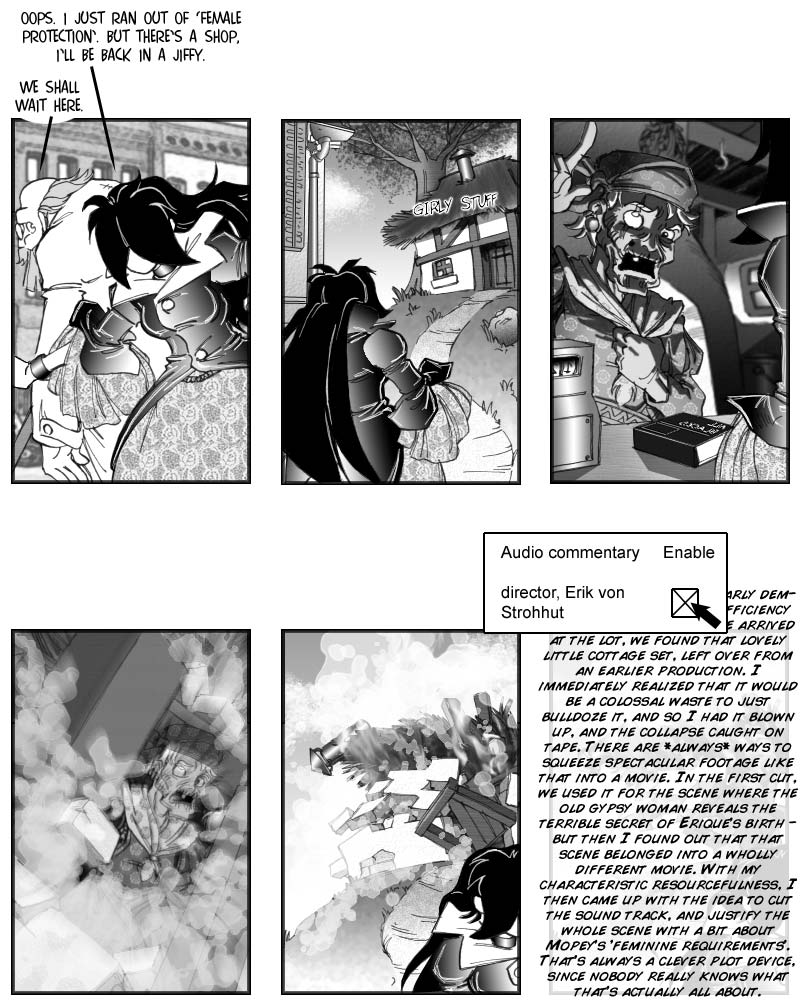 In case you noticed anything strange going on here between Aug. 20th and 27th, you might want to look here.

A whole bunch of great new fanart from Maria and Michelle of Shounen-ai Kudasai is on display in the fanart thread! Featuring all of the main characters, and M & M’s own B-movie proposal: No matter how fast he ate, he never ate – fast enough! =P

On the issue of today’s episode, I’m not really sure if female protection is something that might stop working gradually or suddenly – and I’m sure as heck not going to ask, either. So I’m just going to assume that it is like one of those deodorants that stop working after 24 hours precisely – well, at least if the ads can be trusted. But Erik is absolutely right, these girly issues are a pretty convenient plot device, offering a plausible explanation for any or all female characters to suddenly disappear from the action for an indeterminate amount of time without provocation. I wonder why we don’t see it more often in movies…I can only speculate that, perhaps, detailed discussion on female hygiene on the screen are bad for candy sales in the lobby.

That bit about bulldozing a set being wasteful is something I once heard some director remark on the audio commentary on some movie (Excessive usage of ‘some’ being courtesy of my bad memory, rather than any tact on my part). He argued that, if a set was going to be anyway destroyed after shooting, it’s best to find some rationale for having it collapse on screen, so you at least get a few spectacular shots out of it. Somehow, that ties in remarkably well with some of my earlier comments on the inevitability of villains’ hideouts collapsing at the end of a movie.

Speaking of stereotypes, Gypsy hags had been a fixture of earlier generations of B-movies – in the fifties, they were displaced by nuclear scientists, but, off lately, they are on the rise once more. They are an universally useful plot device, helping or hindering the protagonists by information or action, both of which they can pull out of thin air at their pleasure – for in movies, Gypsy hags are always empowered with mystic abillities and arcane knowledge, able to delve into the mysteries of the past and the future, work mighty curses or offer protective blessings. In short, their vast magic powers obviously enable them to do anything save getting themselves out of the tiny and primitive huts or waggons in which they typically lead their utterly impoverished existences. The stereotype calls for the mystically empowered Gypsy hag to be small or even tiny, and have unhealthily coloured, wrinkly skin…so, yeah, Yoda essentially belongs into the same category, as well.

Since we are on the subject of mystically empowered people, there’s a new voting incentive, this time featuring Ron Weasley’s quest for some (in)fame of his own. On Monday, we’ll take a look at some of the tragic scenes playing out at the site of the nuclear disaster.