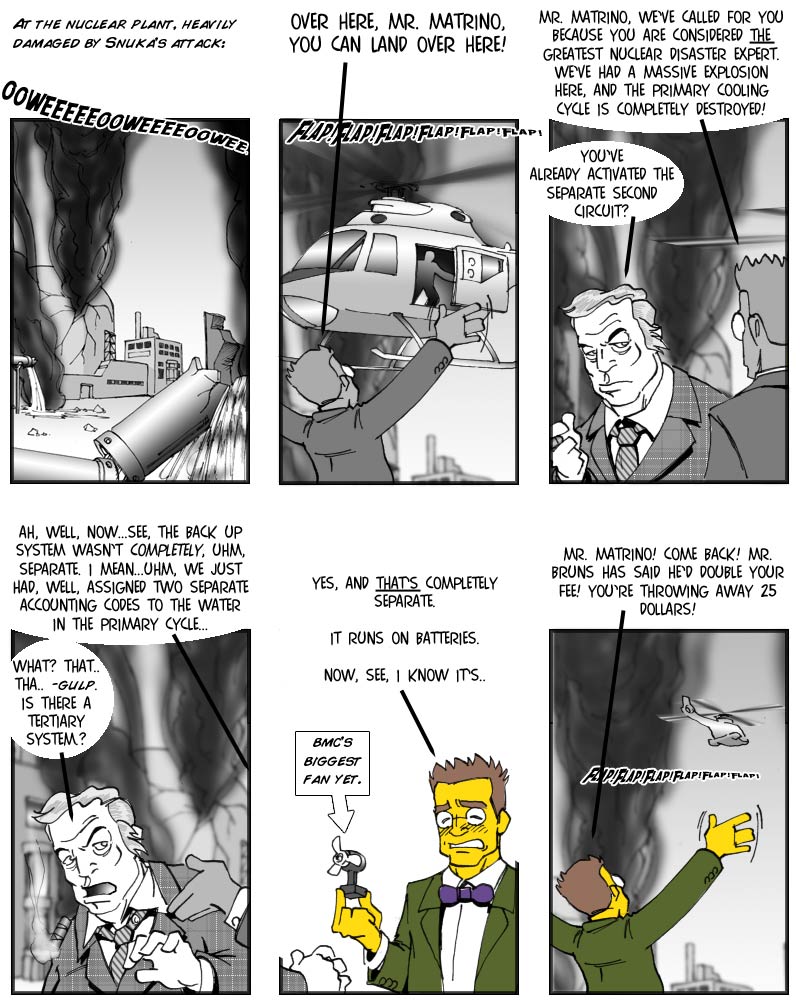 No, the city in which all of this takes place isn’t named Springfield, but I still couldn’t resist to have a Smithers-like character having to deal with the aftermath of Snuka’s little tour of the facilities. Shouting to people in a helicopter, as seen in panel 2, is naturally pretty much completely useless – but, oh, the things B-movie characters do for the sake of exposition.

Mr. Matrino owes a lot of his appearance to a certain Mr. George Kennedy, who was a recurring feature of disaster movies of the seventies of eighties. A few people would even claim that most movies he appeared in during this time were complete disasters (not through any fault of his, though). Usually, his character was the expert brought in to deal with any given catastrophe, optionally sacrificing himself in the process…naturally, in those movies, he never turned tail and fled, but I guess the situation on the ground this time around is just a bit too hopeless even for a man of this caliber. Or for this sum, at least.

Naturally, primary and secondary cooling cycles are required to be completely separate physically. Fulfilling that requirement solely through accounting tricks (often referred to as ‘ful-filing’) means *really* cutting it close, but the reactor’s management made up for that by purchasing that tertiary system, for which even a spare set of batteries is kept available at most times. Still, I think they should be more careful with that kind of thing…if word gets around, people will soon believe that there’s something generally amiss with accounting practices in the energy biz, and where would the management be, then? (Well, likely in some sunny country with low taxes and no extradition treaty.)

Panel five shows the biggest fan yet to appear in BMC – Yeah, it’s still a bit on the smallish side. But I’ve managed to script a windmill into a later strip of this chapter, and then that’ll give me major bragging rights.

On Thursday, the Professor and his entourage will arrive at the plant – will the greatest scientific genius of our times be able to prevent certain disaster? And, more importantly, will the Professor? Stay tuned – and please don’t forget to vote.