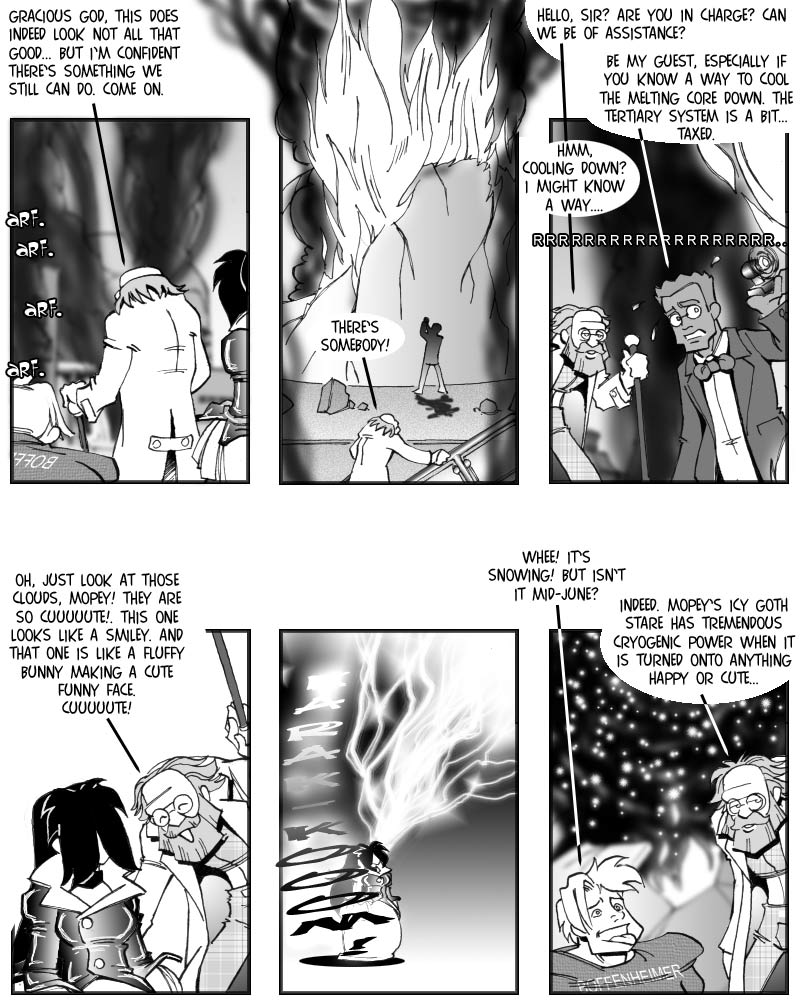 As Mopey would put it, the difference between a true goth and a poser is a matter of degrees…the number of degrees you can cool something down by just staring at it. I guess you know what kind of icy goth stare I mean…the one I’ll now probably get from a couple of people…=P

Mr. Smithers-like has had the tertiary cooling system run at full power for quite a while now, but is slowly beginning to doubt whether it will be up to putting out the raging reactor fire. Bless him for trying, though…he’s just that kind of a guy.

On the Professor’s part, that was some pretty quick thinking, but he was already well acquainted with the power of Mopey’s stare…they use it to good effect in experiments at the lab. Other labs marvel at how Professor Dr.’s manages to get that close to absolute zero without the necessary equipment – but it’s quite simple: they show a video of a Disneyland parade to Mopey. However, they cannot let her employ the look for more than 15 minutes at a time, for then the very texture of reality starts to fray at the edges… Now that that mighty power is revealed, I guess I have to come up with a blanket excuse for all past and future instances where it would be an obvious choice and highly useful, but was not or will not be employed…*checks file of blanket excuses*…OK:SUBCONSCIOUS SUPERHYPNOSIS!

I admit that Biff’s remark in panel six is way off, but this strip would originally have run a lot earlier. Nevertheless, I left it as it was – after all, making it snow in September is, unfortunately, not nearly as major an achievement as in June. And yes, Biff *is* trying to catch a snowflake on his tongue. Big kid.

On Monday, boys and girls, we will be learning a bit about snow. Wheee! Please vote.