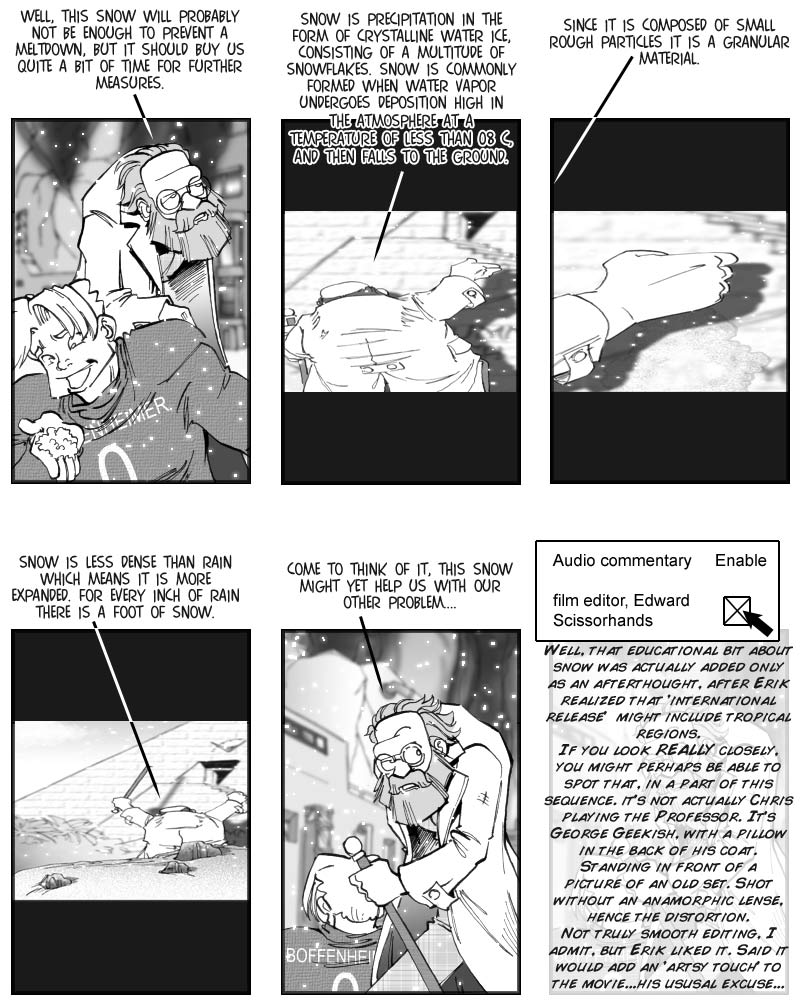 And now all of you know what snow is, even those that live in the more favoured regions of our globe. To add my own, less scientific remarks to the Professor’s (which are a Wikipedia quote), I think I should mention that it is also white, cold, and a pain to shovel off the sidewalk. When snow is freshly fallen, it is all white and pretty – then it gets gray and dirty, and starts to form glaciers in your driveway. Therefore, only people that live in the moment, without thinking ahead, can rejoice when snow starts falling…that is, mostly little kids and Biff.

Speaking of lack of forethought, while it is a lot more common for scenes to be deleted from a final cut, it does happen that scenes are added later. Ideally, they should be shot with the same actors, costumes and sets (which doesn’t always help, even – have you noted Hugh Jackman’s ginormous hairdo on his intro in X-2?), but if the budget doesn’t allow for that you can also: – replace the original actors by stand-ins of completely different physique – replace the original costumes with anything you find in your wardrobe, including that butt-ugly jacket Aunt Martha gave you after Uncle Harry died, and which you have not only never worn, but never even got remotely within sight of a shadow of a doubt of never wearing. – replace the original set with another one, or pictures of the original set, or pictures of another set, or the woods behind your house, or a blank wall. Blank walls work best, since they can double for any kind of structure in any period – after all, it’s not like there would have been elaborate murals on every wall in Ancient Rome. – replace original props with…anything or nothing. – some or all of the above

I must admit that I’m quite impressed with George’s overacting…I think I’ll have to give him a part in the next chapter. =P

A new voting incentive also goes up today, this one a little poster for Lee Hung Gai’s first movie as male lead, scriptwriter, director and producer. Naturally, any resemblances to any successful, big budget movie is entirely…uh…is that called ‘cidental’ then?

Perhaps you’ve already guessed what thought struck the Professor in panel 5, and he is right, as Thursday’s update is going to show.