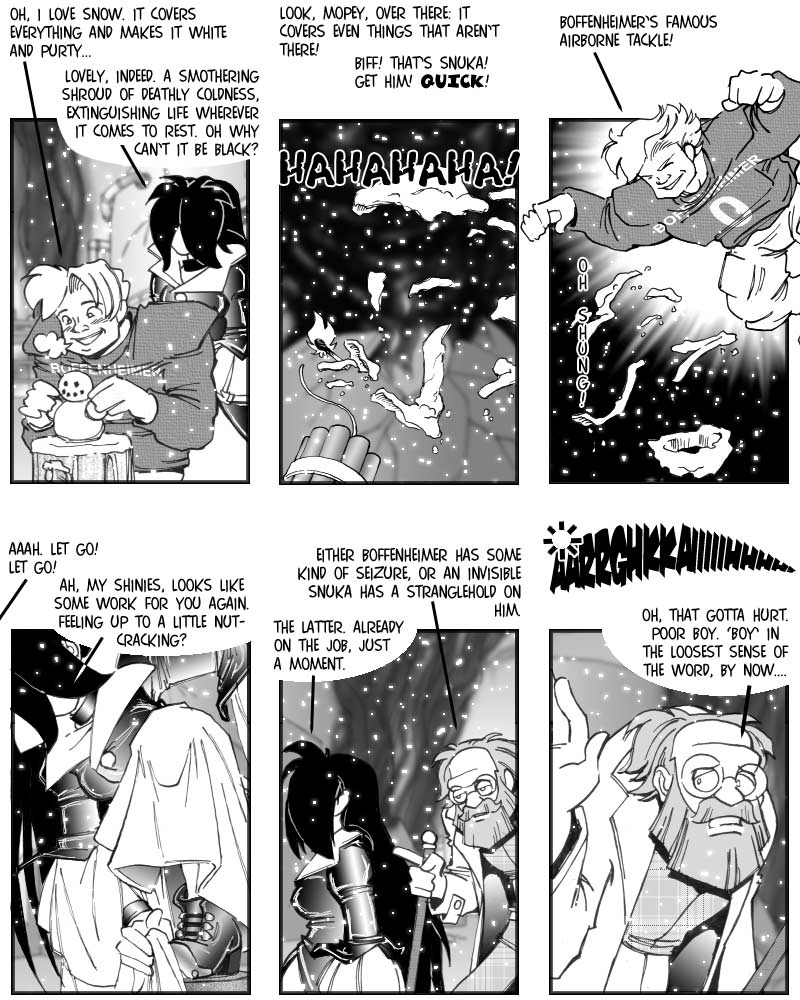 There’s a reason why Mopey is immediately aware that the situation calls for an impromptu performance of the Nutcracker Suite for two Chinese bells, and it’s simply that the whole drill has already been rehearsed once before- way, way back at the beginning. It’s important that Snuka undergoes that at least once per chapter, in order to postpone the onset of his puberty – his cuteness factor is important to the balance of the cast. But, thanks to Mopey and her steel-capped boots, all change in his voice was upwards, up to now.

As you can see from panel six, even Professor Dr., not normally given to extreme feelings of sympathy, can’t help wincing when witnessing such a harrowing display – no male could. Panel five, by the way, contains another prime example of ‘supernatural perceptiveness for the sake of exposition’ on his part. That’s what scientist are for, at least in a B-movie.

Mopey’s comment in panel one pretty much mirrors my own sentiments towards snow…I just can’t begin to imagine what’s supposed to be romantic or pretty about a lot of frozen water covering everything and killing off sizable portions of animal and plant life. It’s just like DDT, really, and nobody seems to consider that excessively romantic or pretty. And then there are some people who like snow because they enjoy tying two planks to their feet and falling off a mountain…whatever’s up with that? Well, let’s wait and see how climate change turns out now…

On Monday, our friends will have to decide how to deal with a newly-captured and mostly-emasculated Snuka. Please vote.