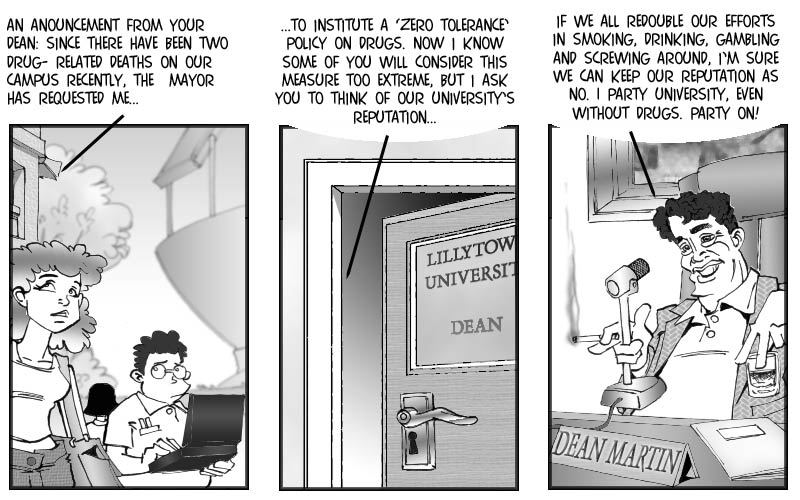 I think it was quite early in the ‘Mummy’ chapter that Prof. Dr. first mentioned that Lillytown U.’s dean was named Martin (too lazy to look for that episode in the cataclysm of chaos that is my harddrive :P). The name was a spur-of-the-moment decision back then, and I had no idea if the dean would actually ever show up. But, yeah, when I had to put the face to the name now, there was just no way to pass up on having a Dean Martin that looks like Dean Martin. And has the attitude to match. XD

So if Lillytown U. is a party university, how come they have such a venerated scientist as Prof. Dr. amongst their staff? Simple – the Prof. has been hired in the 30ies, when it still was a catholic seminary. 😀 And he doesn’t go looking for another job because he dreads moving – giving the startling amount of knick-knacks he has accumulated through the decades.

With what has gone before, this episode was pretty much unavoidable – ‘zero-tolerance policies'(or in general terms, acts in which the persons responsible for an institute for learning abdicate their status as beings able to think for themselves) get instituted after much minor incidents these days. I’m just waiting for the day on which some student is hurt by a falling apple and people start calling for a ‘Zero-G’ policy. Fortunately, the Lillytown students can rely on their Dean to defend the ‘smoking, drinking, gambling and screwing around’ part to the last – he knows what being a student really is about, after all.

On Thursday, Snuka will run afoul of the new policy – and, admit it, you are surprised it’ll take that long. New voting incentive today, a follow-up of sorts to the last one.

Text: From the job description for ‘Dean of Lillytown U.’: “must be able to hold a microphone, drink, smoke…all at the same time…”