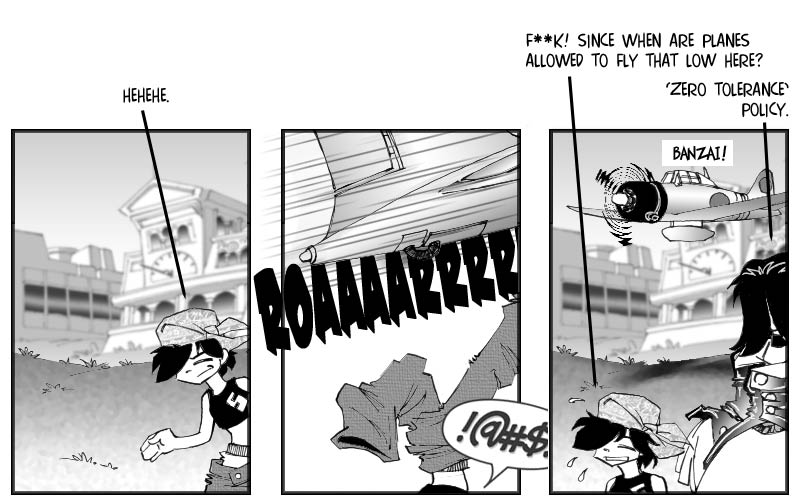 I’ve received another shiny fanart shiney! It’s a beautiful rendition of BMC’s goth chick No.1, Mopey, with a perfectly fitting tagline: https://web.archive.org/web/20070504015020/http://www.deviantart.com:80/view/30634160/ by the creator of the fantasy manga ‘Return to Eden’: http://returntoeden.comicgenesis.com/ And Maria and Michelle of Shounen-Ai Kudasai (http://kudasai.stripspace.com) just dropped off another shiny minicomic shiney in the fanart thread on the boards: http://www.bmoviecomic.com/board/viewtopic.php?p=460&sid=cbfdb3f07cd99e92b554c572e8e65895#460

The official American designation for that WWII Japanese fighter plane was actually ‘Zeke’, but it was generally referred to as ‘Zero’, due to the fact that its Japanese Navy designation was ‘Type 00’ (its year of introduction, 1940, was the year 2000 in the Japanese calendar). Originally, these planes were even marked ‘Type 00’ on the outside, but that lead to serious problems with people urinating into them…or worse.

Snuka is sneaking around in panel 1, but that doesn’t necessarily mean he is up to something. It’s his normal mode of walking, he always sneaks…uh…because he’s…always… up to something… o_0;

How the Zero gets there? Uh…See…like…*cough* See, there’s this super-secret Japanese submarine aircraft carrier which was built by this group of Japanese servicemen that were stranded on that Island at the end of the war, and they found all those facilities there and all kinds of metallic ore, but the war was over and they didn’t want to surrender, and they built this super carrier, and ever since then, they prowled below the surface of the world’s oceans, waiting for the day when some foolish dean would give them legal grounds to launch a devastating Pearl-Habor-style attack. And this submarine carrier is ultramodern and advanced, but they still use the old fighters…uh…for nostalgia. *coughing fit* And for those that find this explanation ridiculous, let me refresh your memory: ‘human-looking Klingons’. XDXDXD

Don’t miss Monday’s update, which was met with the most startingly varied reactions from my test audience yet. XD Please Vote, also.