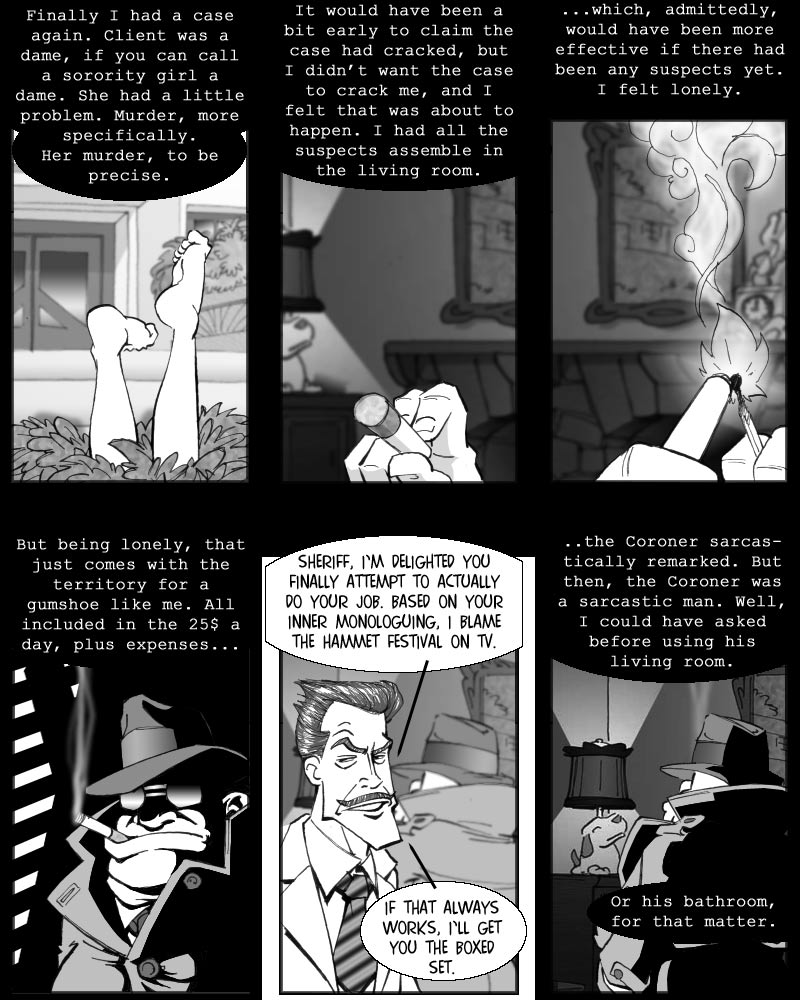 You have to admit that that ‘film noir’ touch adds a certain whiff of class to the Sheriff’s incompetency. Thank God that there was no ‘Godzilla’ festival on TV…no telling what might have happened. Law enforcement professionals, naturally, keep pointing out how their jobs are ‘nothing like in the movies’, yet I’m convinced that not a small percentage of them actually chose that career because of ‘the movies’.

The pair of legs in panel one is that mentioned in Monday’s strip, but, speaking of incompetency, they appear to be two right legs. Uh, of course that’s incompetency on the part of the movie’s propmaster, not on my part. I meant them to be that way. Really. Do these eyes lie? -> O.O

As far as the Sheriff’s smoking is concerned, keep in mind that he is a well-trained, professional cartoon character (even if he appears in an unprofessional cartoon, at the moment). His training enables him to remain unharmed when he is tied to a crate of dynamite, set on fire and catapulted into a Grand Canyon filled with starving crocodiles. And that’s only the intermediate exam.

Assembling all the suspects in the living room is a hallowed tradition in fictional law enforcement. It’s just a question of style…of course, as soon as you know the culprit, you could just have him/her arrested, but that would just be cheap. No, the way to do it is having all the suspects assemble in the living room and, one by one, explain at length why they are not the guilty one, until only the culprit remains. Say, wouldn’t that be a great dramaturgy for the Academy Awards? I mean, all the suspects are assembled, anyway, and wouldn’t it add something to the proceedings? …At first, Mr. (name withheld) I thought you could have been the best actor, but then I discovered something that would not fit into that theory – your acting like a wooden doll, specifically. At that point, I realized the real best actor was… One step closer to real-life ‘Celebrity Deathmatch’.

Well, and considering panel six, I guess I can’t really deny that that’s toilet humour, even if only in the broadest sense.

New voting incentive today, Harry Potter catches up with the news. Or the news catch up with him, whatever. Next Monday, it’s back to Prof. and company on Snuka’s (invisible) track.