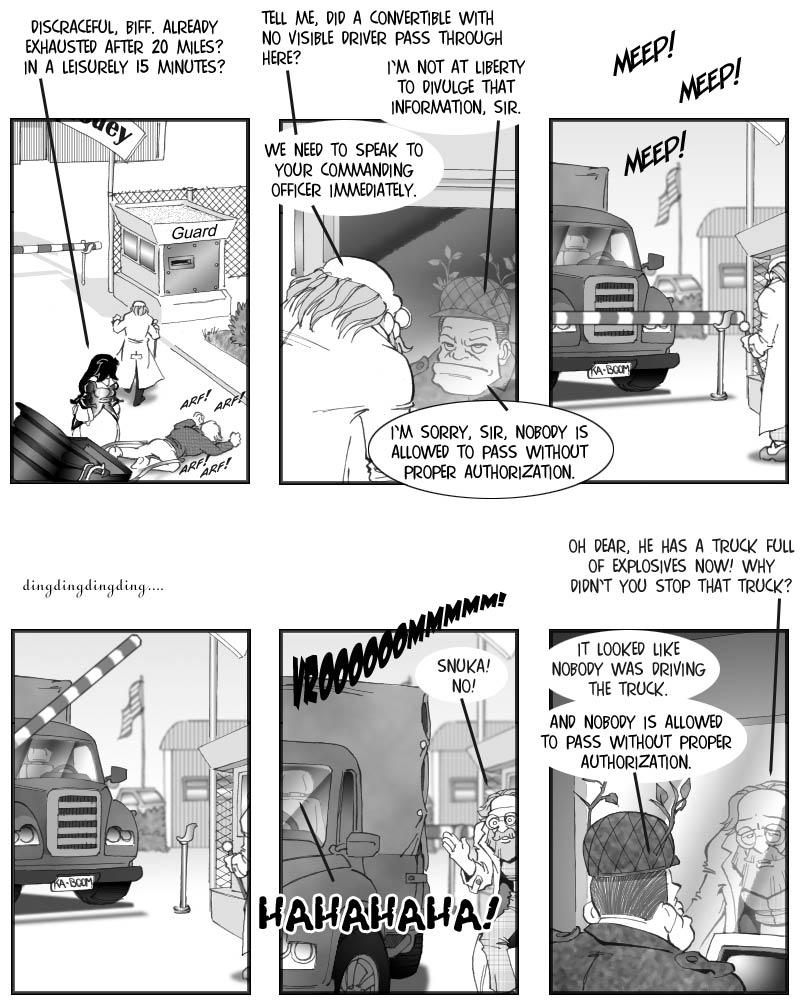 Panel six contains another case of a typical B-movie phenomenon: a sudden leap of knowledge. How does the Professor know the truck was ‘full of explosives’? Simple – he knows it because it’s the quickest and most convenient way to get that information to the audience. Of course, that’s perfectly allowable, because there are just so many plausible potential explanations for it…it could have been written on the side of the truck in invisible ink, readable only through the Prof.’s special glasses…or perhaps the Professor, after decades spent in laboratories, can smell volatile substances…or he just knows that all Army trucks are always full of explosives. Once more, I have to admire the genius of George Lucas – in the Star Wars universe, you could just conveniently assume the Prof. learned it ‘through the Force’.

I just realize that the Sergeant’s* attempts at camouflage are rather out of place in his office surroundings. It would have been more effective if he had attached a stapler and a mouse to his helmet.

Actually, 80 mph isn’t at all bad for a riksha…Mopey’s just measuring Biff by his habitual bragging, is all.

And yes, Army trucks have horns that sound like roadrunners. All for the sake of camouflage.

Turn in on Thursday to learn what Snuka is planning to do with his new-found wealth of combustibles. Please vote.

*In a B-movie context, ranks are not indicated by insignia, but by facial features. Uniformed characters featuring massive jaws and protruding brows are automatically assumed to be non-comissioned officers.