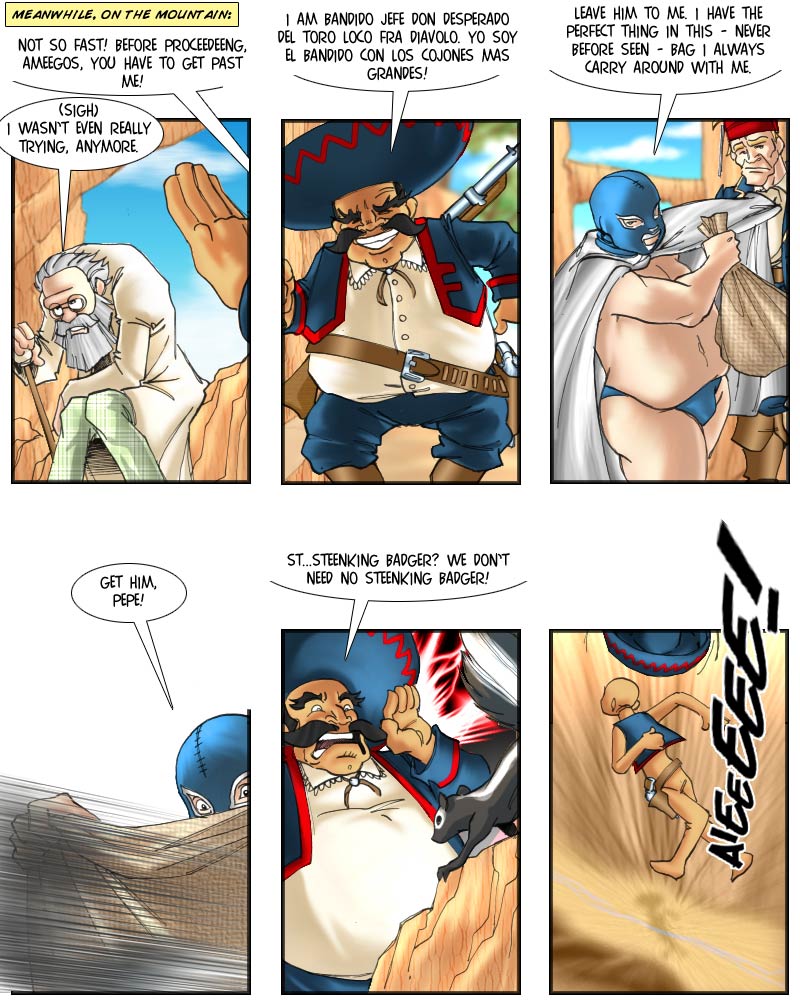 Another slightly dated strip, originating from the first draft for this chapter. Freshly coloured, though!

B-movie stereotypes regarding Mexicans/South-Americans* have already been discussed, but this strip is based on a special subset of these – the stereotypes relating to Mexican villains specifically. While ordinary B-movie Mexicans get to choose from a vast selection of names (i.e. four: Pedro, Pablo, Paco and Juanito – the last one being applied without regard to age and size of the subject), all Mexican villains in B-movies are named El Toro Loco. They are also always overweight, mustachioed and wear mariachi outfits. They tend to be heavily armed, but usually with weapons of late 19th Century vintage. Bad teeth are optional – depending on movie budget. Usually they are accompanied by a full band of henchmen, who always refer to them as el jefe – but our Space Tyrant decided to try out a single one at first, to see how he’d perform. Poorly, as it turns out – for El Lightning took advantage of the great weakness of Mexican B-movie villains: their fear of stinking badgers. (Some people speculate that might go back to a typo in some form…)

El Lightning saves the day, once more…and once again not by fighting, but by having the right kind of item handy. That’s the advantage a B-movie character gets from wearing a cape – he can be conveniently assumed to have had a certain item, the need for which arises later, on his person the whole time, hidden in his cape. Yes, even skunks. Don’t try to figure out the logistics.

Naturally, Mexican B-movie villains have to meet their end in the end, by any of the accepted ways for villainous exits – for example a sudden cut to footage of an unconvincing dummy falling from great height.

That’s it for today, more on Monday. A new voting incentive is up, as well.

*One and the same in B-movie ethnology.