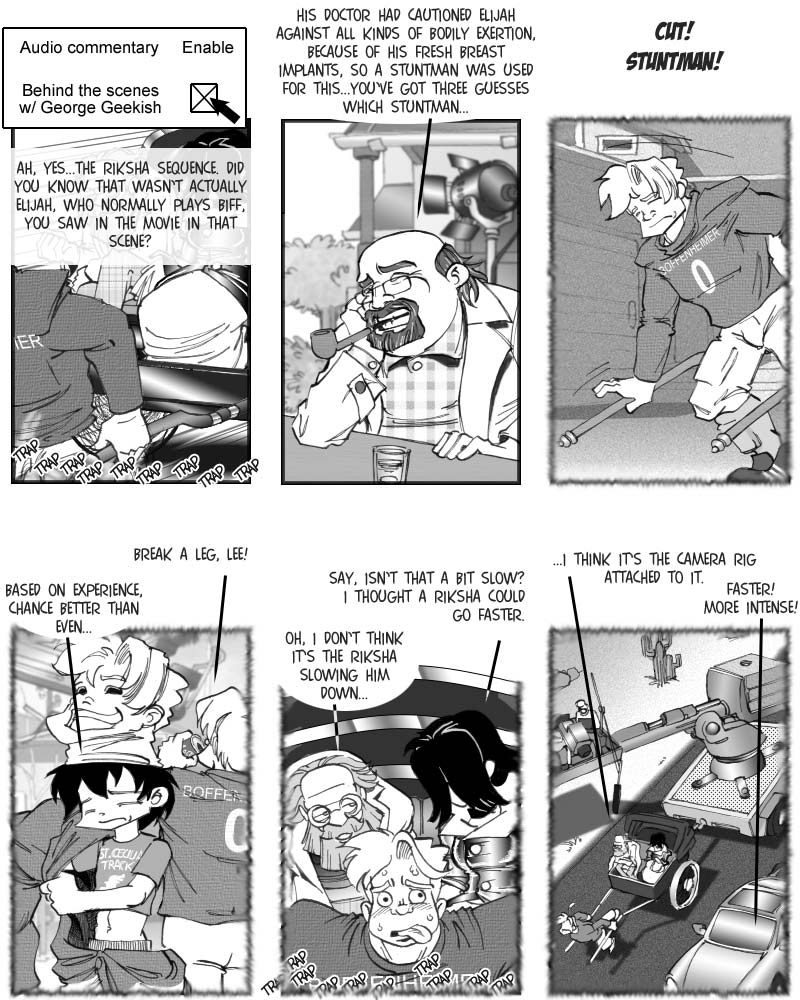 And I bet you were thinking they call these kind of movies ‘exploitation films’ because of their content – Wrong. It’s really just because, with a B-movie budget, you couldn’t ever finish a film without having someone like Lee Hung Gai, who does all the dirty work and doesn’t complain. Too loudly.

Although Chris is wrong in panel 5: It is the riksha slowing Lee down, technically. For Lee would have had to pull the camera rig, anyway, even if Elijah had pulled the riksha. Lee’s just that kind of guy. XD

The voice from the car is director Eric von Strohut’s, obviously, although the quote is usually attributed to George Lucas.

The breast implants mentioned in panel two are not of the bulbous type, naturally, but of the flat type that can make a man appear more muscular. Nobody in Hollywood has any of these, I think that goes without saying.

It’s astounding how many times the people you are seeing on the screen are not actually the people you think you are seeing. Even the most casual observer quickly realizes that the Frankenstein monster was played by two different people in ‘Frankenstein meets the Wolfman’, simply because of the differences in body height – but, actually, the monster was played by four different people, with Bela Lugosi only doing the close-ups and a few of the other scenes. Nowadays, of course, it’s mostly a question of economy – big actors charge big bucks, so the very moment their characters are scripted to have their backs to the camera, it’s just that much cheaper to have their stand-ins do it. XD

When you are watching a Tom Cruise movie, and his face isn’t taking up a least half the screen, it’s pretty likely you are actually looking at his long-time stand in, famous Austrian circus midget Franz Dasch. XD

Peering into my crystal ball, I predict that, given the advances in digital effects, in a decade or so actors aren’t actually going to do any acting in movies anymore. They are just going to license the use of their facial features on a digitally generated character. Around that time, B-movies will be easy to spot by the fact that all the characters in the movie look identical, because they could afford only a single license. (Although the Tom Cruise license will include a clause that you are not allowed to have his digitally generated character do any romantic scenes with another version of himself – unless it’s a female version. =P)

Next Monday, we’re going to catch up with what has happened on the campus in the meantime. Please vote.