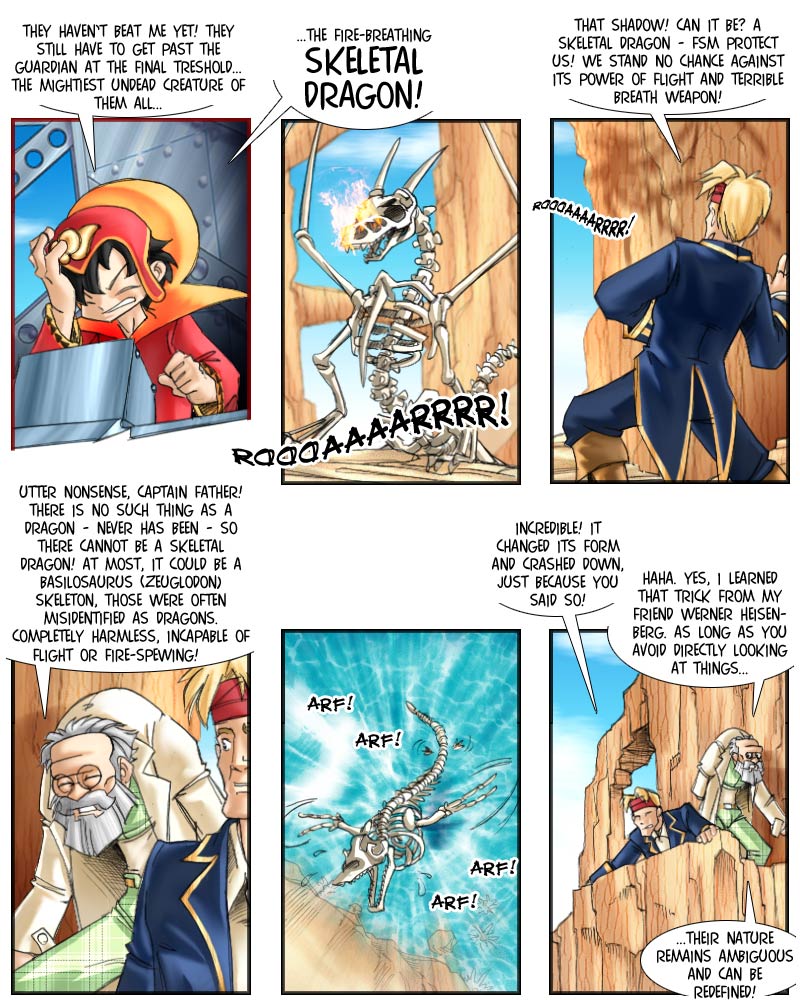 “Skeletal Dragon? That’s one of the most powerful cards in all of Duel Monsters!” Solomon Mutou

Blissfully unaware of Klytoris’ newly awakened traitorousness, Akuns presses on with his hopelessly frayed and futile plans to stop the heroes from reaching the Palace of Pleasure – with the usual villainous method of just doing more of what has already proven to be ineffective. His newest henchcreature has a certain aesthetic appeal going for it, at least, but in general I have a hard time understanding how these reanimated skeletons are supposed to work – with the tendons and cartilage gone, what is even holding them together? And wouldn’t they be rather fragile, anyway – brittle bones and all that? (And, in the case of a skeleton dragon, let’s not even begin with flying without skin on his wings, or breathing fire without any internal organs.) If you ask me, if a necromancer reanmiates a skeleton, he probably really wanted to do a zombie – and just doesn’t want to admit he’s got poor time management skills.

The skele-dragon could still have posed a considerable problem if the Professor hadn’t disabled it so cleverly. Yes, I know, that’s not how Heisenberg’s theory works, going by what you learn in school – but you know, they’re not telling you everything! The trick the Professor is using is the secret second level of Heisenberg’s uncertainty principle – as can be seen, it is very powerful, so Heisenberg wisely restricted knowledge of it to fellow professors. (So you see, whenever your professor resignedly closes his eyes during class, secretly they just might be redefining you into something that asks more intelligent questions.)

Basilosaurus, by the way, was indeed incapable of flight. As well as of walking, since it actually was an early whale – but early explorers can be readily excused for not immediately realizing that. They just didn’t expect whale skeletons in the middle of the desert.