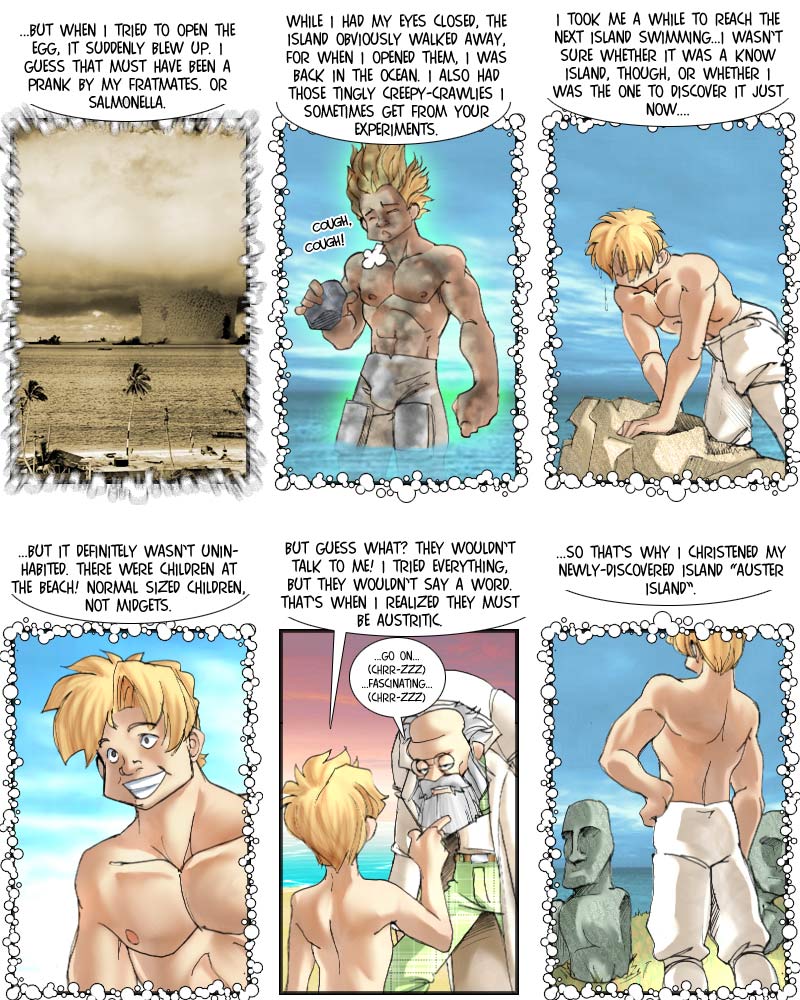 Biff’s fratmates often play those little pranks on him, were they rig random inanimate objects to explode in his face* – so naturally, he immediately suspected them to have been behind that egg going all ‘kaboom’.

Thanks to the Professor’s experiments, Biff is also not stranger to radiation. He likes the effect, in fact. Not only does it give him funny creppy-crawlies, he also always used to be afraid of the dark before he started softly glowing himself. (The Professor has no ethical qualms regarding these experiments, obviously. You always have to weigh the boons of research against the human cost. In this case, his research is a boon to humanity, and rendering Biff infertile is another boon to humanity, so it’s really win-win.)

Speaking of the Professor, I don’t think you can really blame him for not paying much attention to Biff’s tale in panel five. He knows the man, and realizes that there is no scientifically sound way to conclude anything about what actually happened from the way Biff relates it. There is only the most tender of connections between reality and Biff’s perception of it to begin with, and that tender thread has little chance to survive getting mangled by Biff’s lack of language skills. The Professor realizes that the ‘children’ mentioned by Biff probably really weren’t children at all – but from his perspective there’s really no telling what animal or inanimate object Biff might be referring to.

*Well, Biff considered them pranks. Actually, they were more like assassination attempts, because Biff used to be an embarrassment even for his fraternity, and his fratmates were assholes that way. Now that they’ve all become zombies/goo before Biff’s brain ever managed to get near to figuring out what was actually going on, Biff will always remember them fondly and lament their untimely departures.