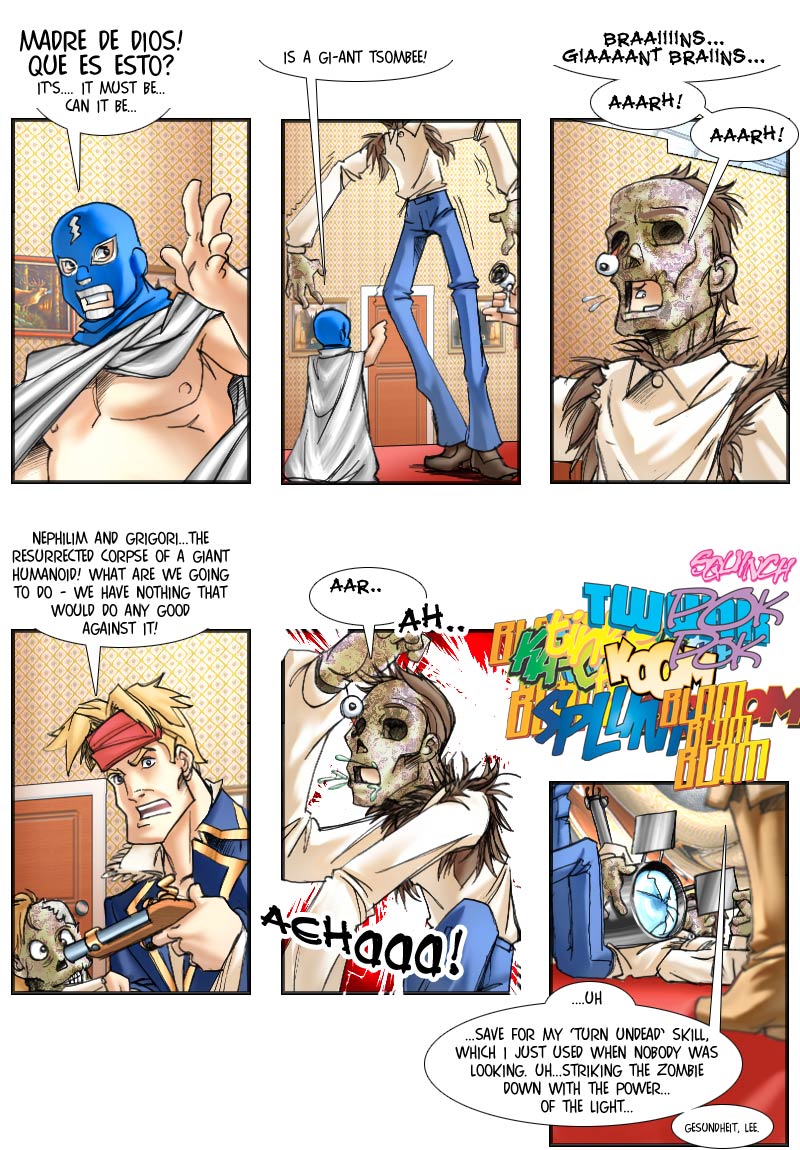 This also gave George Geekish the opportunity to show off with his mastery of forced perspective – and give his youngest daughter her first part in a movie: she stands in for El Lightning in panel two, making Lee appear bigger by comparison (which none of George’s older daughters could still have done effectively). He also designed the monster suit himself, working off a pointer or two he got from Pierce Chanley. Pierce had told him, for example, that it’s a good idea to have longer, shaggier fur at the joints, to cover up the folds and seams – although I think he should have pointed out to George that that only goes if you have a furry monster to begin with.

There are a couple of conditions that make it really unwise for anybody to take on a part requiring them to wear a full-body monster suit: claustrophobia, rubber allergies and heat sensitivity spring to mind – as does violent, compulsive sneezing. (Lee, of course, isn’t really unwise in general – he acted unwisely only a single time in his life, in fact. But once he had signed that agency contract without properly reading it, he suddenly found himself forced to act against his better convictions on a steadily growing number of occasions.)

As far as the script is concerned, the scriptwriter made no effort at all to account for the presence of a giant. They’re in the bible, after all, and a while ago there was that photoshopped giant skeleton making the rounds of the Internet, so he figured the audience would accept it readily enough.

The credit for saving the whole scene, of course, goes to the actor playing the Captain – a really inspired bit of improvising helped blend the unplanned accident neatlessly into the rest of the mess. The plot, I wanted to say…the rest of the plot. Allegedly, he’s also the actor that improvised the line “No. *I* am your father. in The Empire strikes back, after the original scriptwriter forgot to give the Darth Vader character any text for that scene. (You knew that had to be an improv, didn’t you?)