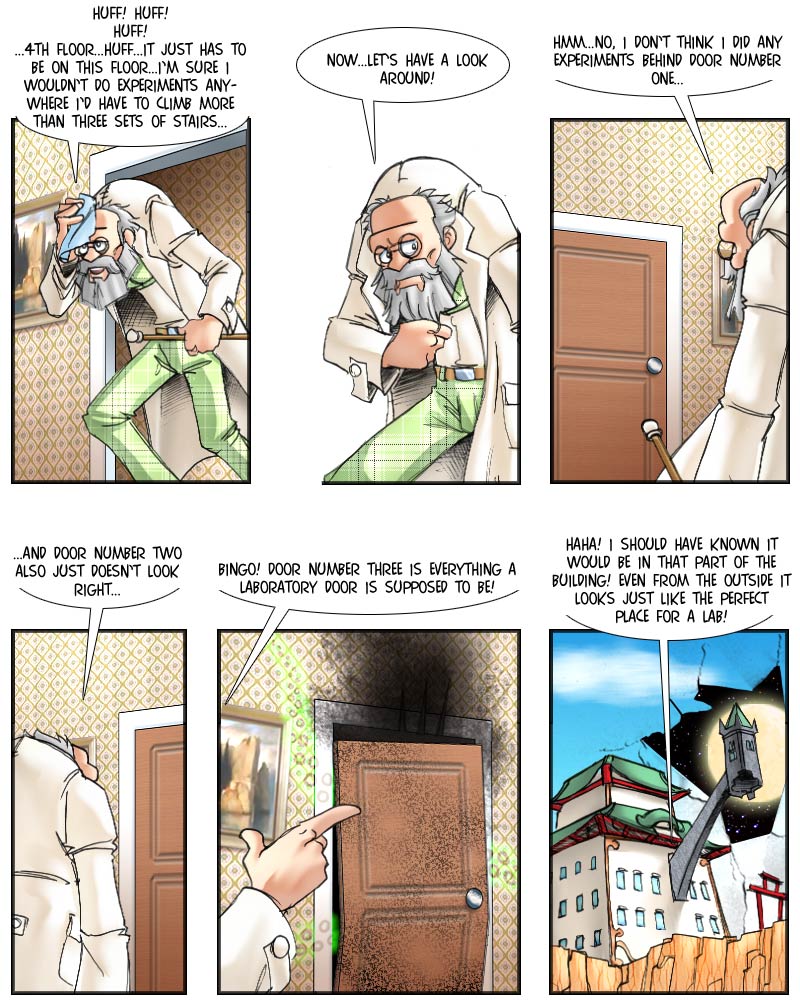 People on opposite shores of the Atlantic ocean continue to have that slight disagreement regarding the proper way to number floors – and despite the fact that his birth predates both the American Revolution as well as the invention of higher floors, I presumed the Professor would have adapted to the American system by now: So when he’s referring to the fourth floor, he means what you’d call the third floor if you call what he’d call the first floor the ground floor. And given the Palace’s location at the very top of an implausible high and sheer mountain, it’d be a bit odd to refer to it’s first floor as a ground floor in any case…

Fortunately for the Professor, once he had reached the fourth floor it wasn’t difficult to find out behind which door he had been doing his experiments: for one thing, there were those little, tell-tale signs that are left by thorough and passionate scientific work (sometimes running around naked and shouting ‘Eureka’ just *has* to take precedence over cleaning up after your mutated, radioactive octopus) and for the other thing – it’s always behind door number three, isn’t it?

He’s completely right, of course, that he could have seen from the outside where in the building his back-up lab was located. Science does heavily intersect with black magic in B-fiction, and that is inevitably reflected in outward appearance – and while he isn’t evil, the Professor is just slightly mad enough to qualify for a somewhat gothic, somewhat physically implausible addendum to the building, bathed in the rays of a full moon even in the middle of a sunny day. If he was both full-blown mad as well as despicably evil, he could have qualified for a ‘secret’ lab in the midst of a desolate wilderness, with giant, curved spikes coming out of its sides and a front side shaped like a human skull with an agonized expression. (I wonder how you fit something like that into a grant proposal…“Since my geophysical experiments will inevitably climax in a machine that will not only be able to precisely predict earthquakes but actually cause them, an appropriately gruesome design of my lab’s main entrace is essential to a successful conclusion of both my experiment as well as my quest to rule…the world! Muahhahahahah!”)