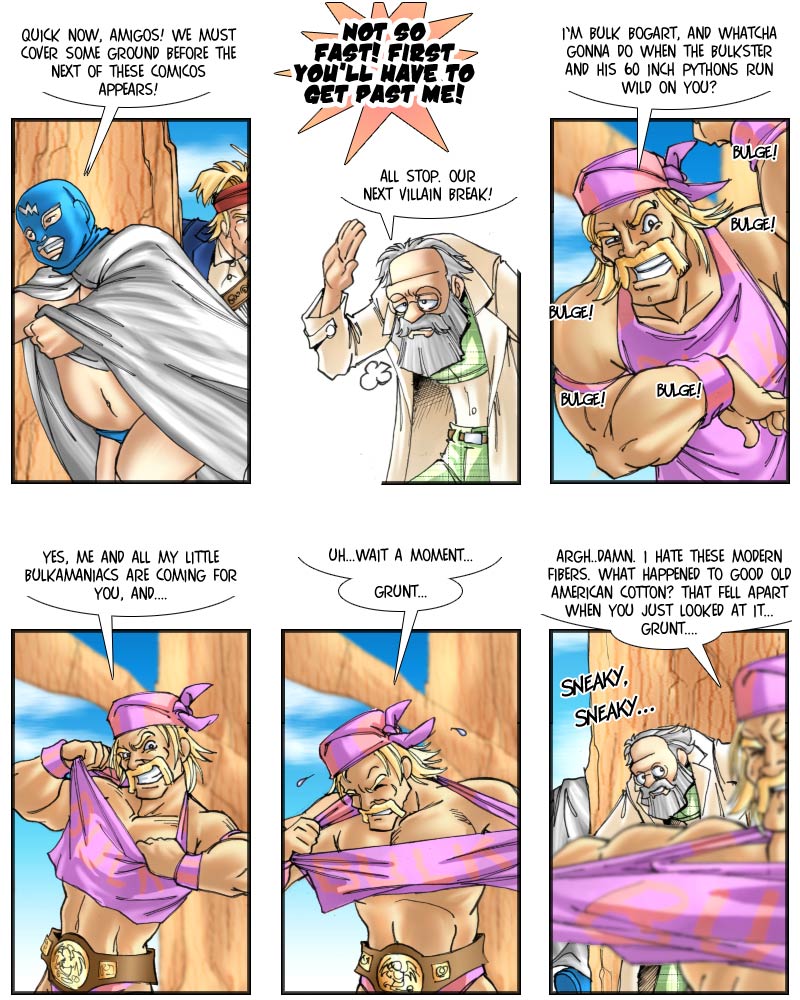 The alternate title I considered for this strip would have been: “That 80ies Hero”. This is another one from the early batch of strips prepared for this chapter, thus the (larger than usual) model deviation.

Speaking of a long time ago, this is actually already Bulk’s second appearance in the comic, his first was in a single panel way back at the beginning of the first chapter.

By the way, I scripted this strip before I became aware of the fact that a certain former wrestler has repeatedly made the news recently, and had even had his own Osbournes-style TV show – I really thought he had been left behind in the eighties, and passed from public memory forever. I also hadn’t been aware that wrestling shows are apparently still being put on occasionally, and even televised. O_o; Will humanity never learn from the horror that was the eighties?

Said wrestler was a big part of that, he and his habit of proving his strength by ripping off his t-shirt. Yup, he wanted to prove that his bulging muscles (for which he had sacrificed his hairline early on) were good for something, so he destroyed a (pre-perforated) item of clothing on national TV, twice or thrice a week. Was that worth his hair?

Anyway, modern synthetic fibers and their elasticity have put an end to Bulk Bogart’s t-shirt ripping days of terror at last (or at least), allowing our heroes to pass him by without a fight or too much of a hold-up. If that hadn’t been the case, El Lightning would just have paid Bulk to pull him over…wouldn’t have been the first time. =P

More on Thursday, and a new voting incentive is up, as well.