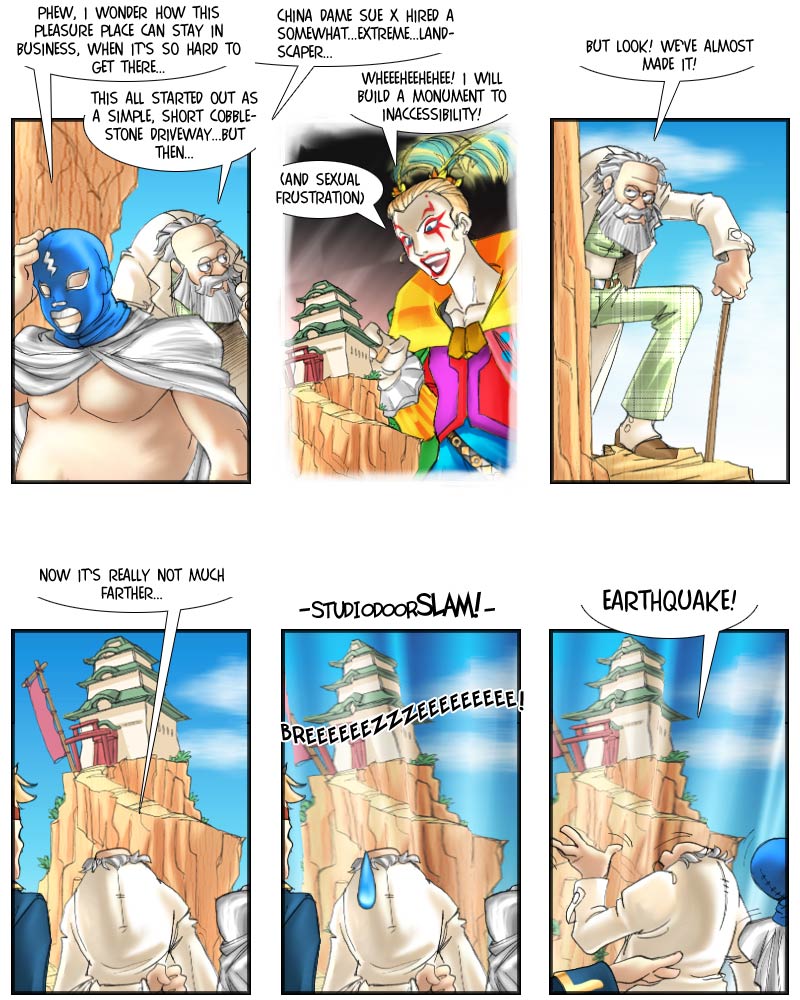 I thought I should offer some explanation why the walk up to China Dame Sue X’s Palace of Pleasure is so impratically long…it’s pretty simple, really: she happened to hire a landscaper who combines megalomania and nihilism with a sadistic sense of humour, both in his personality as well as his work. There are more of those than you might think, but in this special case Sue X should actually have been able to get a clue or two from his outfit…but then, as a madam she probably isn’t all that judgemental when it comes to the way people dress… (And, yes, Kefka works part-time as an architect and landscaper. His influence on the field of architecture has been particularly keen, to the point where his last name, Palazzo, is still in use for a particulary tasteless kind of building.)

The last three panels clearly demonstrate that this movie’s cast consists mostly of veteran B-movie actors – not only do they know how to keep acting around (and working with) any little snafu that might happen, they also immediately start gyrating when somebody shouts “earthquake”. (I bet about half the cast of the original Star Trek would -by reflex- still start tumbling around in their chairs if you played them a tape of Walter Koenig saying “We’ve been hit!”) On an A-list production, the assumption would be that any scene that goes wrong would be re-shot from the beginning, but with a poverty row studio you can never be sure – so it’s best to just stay in character and carry on… And George Geekish would have found that whole earthquake effect brilliant and cost-effective – if it only had been intentional (Oh, heck, he’ll probably find it brilliant, anyway).

Anyway, the goal is finally near! If our friends just keep pressing forward…they’ll run into the projection curtain… More on Monday, and a new voting incentive is up, as well.