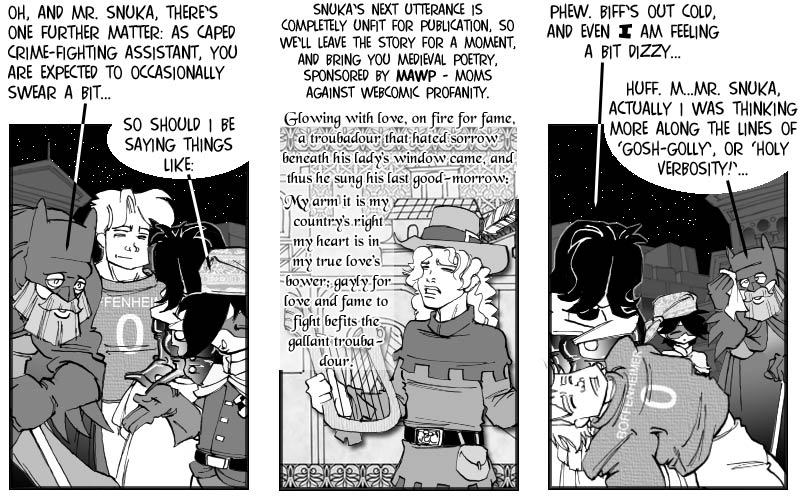 First off, I’d like to apologize for my remarks on Lemmings in the last comment- it was thoughtless of me, I had no intention to…uh, belittle their awesome destructive potential.

Secondly, you might have noted certain changes in the general lay out of this site – how about a big shout-out to the webmaster for the awesome new design? No? Well, OK, then.

Holy Profanity, Batman! Yes, mild swearing has traditionally been essential to the appeal of a superhero sidekick. Apparently, a kid growing up in the 50ies would envy a fictional character for getting away with using untamed, coarse language, like ‘Gosh!’. On the campy TV series, Robin was even allowed to blaspheme around, constantly combining the adjective ‘holy’ with things not officially recognized as holy by organized religion. I shudder to think what general downturn in piety and modesty that must have caused in kids back then. Naturally, growing up as a small-time criminal on the streets of Cairo has given Snuka a much more abundant supply of colourful invectives than Robin. (Growing up on a traveling show heckled by criminals and seeing your family fall to their deaths obviously goes for a sheltered childhood.) It didn’t even take much studying, people threw it at him for free. That, and eggs. And moldy fruit, knives and hand grenades…

Anyway, it really was too much for Biff…who had never even thought of any of those combinations of household appliances, bodily orifices and sexual acts. While I know that not everyone is as prissy as Biff, I still felt it would be better not to risk alienating any readers, hence the medieval poetry. Which IS completely harmless – ‘gayly’ had a different meaning back then. In this case, being happy while running somebody through with a sword. But, since we are on the subject of gaiety, did you notice that even a 14th Century Minstrel looks slightly less gay than somebody in a Robin costume? Is saying something, methinks.

On Thursday, Professor Dr. gets to play with the Bat-Equipment. Please vote.

Text: Snuka has a lot more language proficiency than most people would suspect. It’s just that it centers around swearwords.