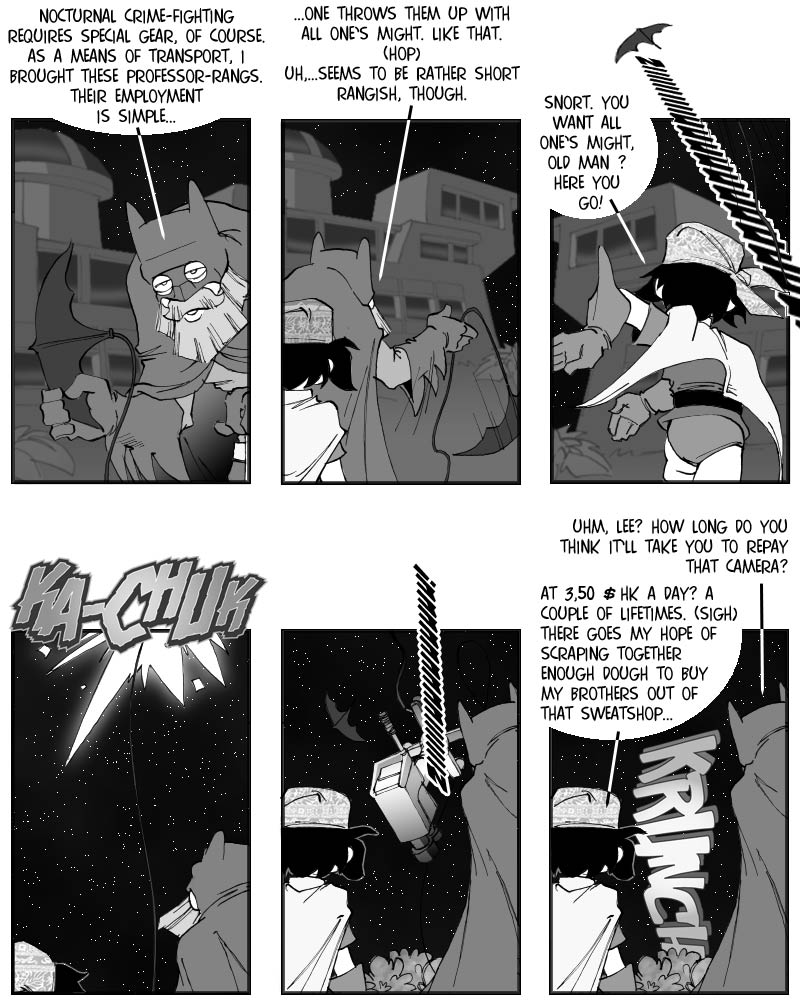 Ah, good old Batarang. So you’re standing on some high building, all you’ve got to do is spot some usable potrusion on some neighbouring building. Flagpoles, lightning rods, gargoyles, satellite receivers- all these things are sturdy enough to carry the weight of a hunky adult body moving at considerable speed. Next step: throwing the batarang so it catches the selected potrusion – no problem, just take the strong and constantly changing winds at such altitudes into account, and throw the ‘rang so that wraps itself around the potrusion twice or thrice. The only requirement for that are the reflexes of a trained athlete, and superhuman ability to estimate distances. Now you can swing to the next building – don’t worry, the batarang won’t come loose, because of…uh…the friction? Uh, right. While physics would dictate that you could only swing to buildings that are lower than the one you started off, you can also swing to higher ones, if you just have the right amount of heroic resolve. Collecting the batarang is easy – just reduce tension in the rope slightly, and it will come loose by itself, because of…uh…the negative friction. Now haul it in, preferably before it reaches the ground and decapitates any unlucky pedestrians – you have more than enough time, it falls slowly, because it doesn’t weigh much. The whole process is now repeated with the next building. Do you see how this is the fastest and most convenient way for Batman and Robin to get around? If you pursue some villain, and he manages to reach the suburbs, where the buildings are not tall enough for swinging more than 3 yards at a time…well, you’ll catch him the next time. Criminals always return to the scene of the crime, after all.

Now you don’t have to worry that poor li’l Lee Hung Gai will end up owing the production several thousands of dollars – every piece of filming equipment is insured, of course. Lee will end up owing an insurance company several thousands of dollars, plus administrative fees. And they’ll break his knee-caps. Still, his situation is not as bleak as it looks – after all, he already earns a lot more than in the first chapter. If his income increases at this rate, it will hardly take ‘several lifetimes’ to repay that camera. Likely just one or two, max.

New strip on Monday, possibly introducing Mopey’s pet. New voting incentive TODAY (of all times), introducing a new feature: We bring you the pictures behind the news! (Well, actually, the picture is in front of the news, but it would have sounded weird that way.)