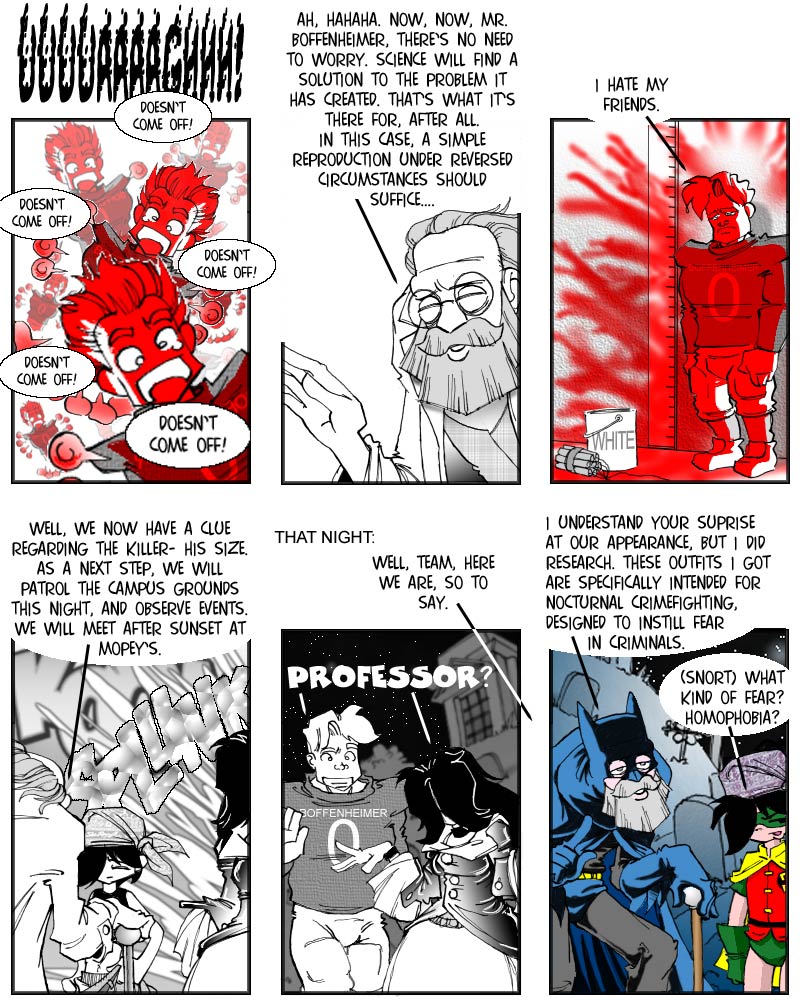 OK, so here I had a real dilemma…of course Biff is not really white. I mean, he is white, but his skin would be pink in reality, what we just refer to as white. And of course pink is actually white in my comic…so what to write on the bucket in panel 3? On the one hand I could have written pink, but then that would have been white, because white is pink, but if I write white, because we call pink white, and it is white, how should people know that Biff is pink-white again and not white-pink? I could have written ‘skin-tone’ but the bucket was not large enough. Anyway, through the magic of comics, Biff is back again to his usual skintone (sans skin-breathing. But he saves a lot of oxygen by not supplying the brain…). And all that would have been unnecessary, anyway, if Mopey wouldn’t have bought indelible paint- but she probably enjoyed panel 1.

Yeah, I know, the official ‘rationale’ for Batman being ‘Bat’man has already been the butt of countless jokes and parodies, and at least 50 % of those go on to make fun of the fact that Batman rounds out his frightful appearance by having his sidekick dress like a circus attraction. No, not ‘The Flying Graysons’ more like ‘The most gayest looking boy on Earth!’ (And I’m not accepting arguments on that – he wears GREEN ELVES SLIPPERS, forchrissake.) So if it’s been done that often already, why did I also join the herd? Well, I was pondering my future crime-fighting career when I suddenly saw the shadow of a terrifying animal, and my mind was set – I shall become – THE LEMMING! (Yes, I just offered a very weak rationale for making fun of a very weak rationale…so you are entitled to make fun of me, if you want to.)

And speaking of weak rationales, of course there’s no logical connection between the killer’s body height, and having to patrol the campus at night…this is just a special prerogative of scientist characters in B-movies – in order to move the plot along, they are allowed to create a causal relationship between random events by simple postulation. The producers’ rationale behind that is equally simple – the average audience member will be accustomed to not understanding scientist, anyway, and so just conveniently blame his own intellectual limits for what is really a plot-hole. Never works.

Speaking of someone who never works, I’m still juggling the upcoming strips around a bit, so I’m not yet entirely sure which one will eventually go up on Monday. But I hope it’ll be a good one. XD Please vote (keep in mind to close your eyes if you are easily offended, it’s still the incentive with the coarse language. XD ).

Text:…but with all the ripping-off going on, I still have SOME standards – no nipples on the costume!