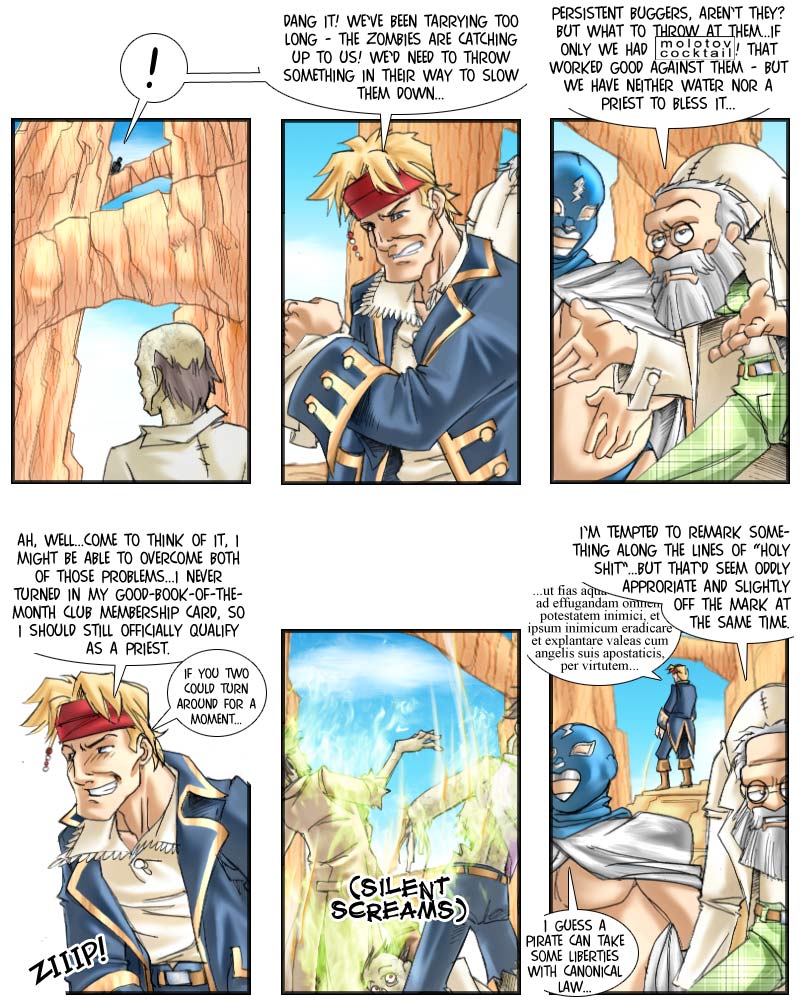 Yes, our heroes are still being pursued by the zombies…actually…it’s just that shambling undead aren’t that fast moving across rough terrain, so you couldn’t really say that they’re close on the heels of the Professor and his group.

As far as the holy water goes, I’m not sure whether Father John Captain McKenzie’s approach is canonically valid – but I didn’t feel it would be worth the effort to enquire from Church authorities whether the question of using that particular source of water had ever been addressed anywhere. Although I wouldn’t be shocked if it had. Be that as it may, holy water and crucifix have long been staples of horror movies, with roots extending back into gothic horror literature. Their effectiveness against various types of undead or supernatural opponents has varied over the years, but the trend has generally been downward – partly, that trend probably reflects the ongoing secularisation of Western societies, but another reason might be the need to elevate or escalate the level of threat posed by such opponents. Realistically, pronounced susceptibility to such mundane and readily available items as religious symbols and blessed water (which could be produced in near limitless quantity) would constitute a severe weakness for any monster (or group of monsters) intending to seriously threaten the very existance of humanity.

Anyway, in praising holy water’s effectiveness in panel three, the Professor is being guilty of a little fib: he concsciouly forgets to mention that he had spiked the holy water he had used against the zombies last time – with trichloroacetic acid.

Including holy water in horror fiction has another drawback, as compared to crucifixes: there’s a certain sectarian slant to it, since only some Christian denominations believe in the concept. On the other hand, religion in horror fiction tends toward having a strong Catholic flavour anyway. And on the third hand, omitting such a traditional religious element from stories in which it would normally be expected (such as vampire fiction) might also violate some people’s sensitivities. Fortunately, there a ways to weasel out of it all, as is hinted at in panel three: when the early Castlevania games were translated into English, ‘crucifix’ was simply changed to ‘boomerang’ and ‘holy water’ to ‘fire bomb’ or ‘molotov cocktail’. The jury is still out on whether that was ridiculous or brilliant, but I’ve still decided to follow that lead here.