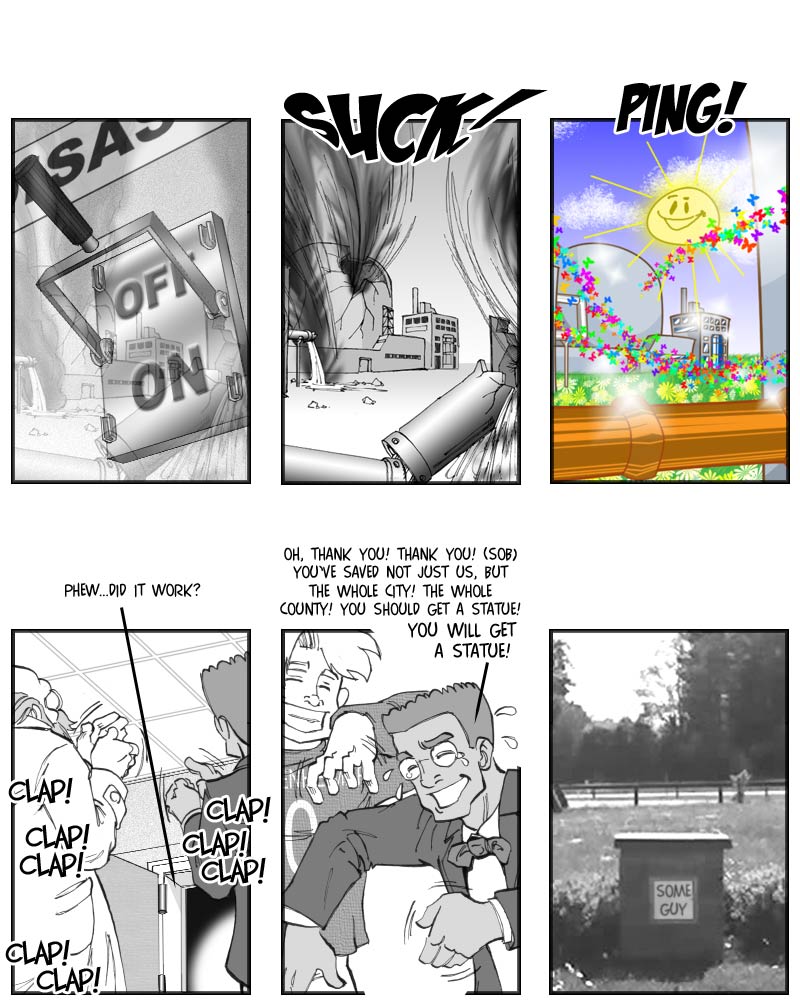 Yup, there are no complex crisis scenarios in B-movies. Every problem that can be solved at all, can be solved instantly and completely by the application of simple means. That goes only for the better B-movie plots, however – some of the cheesier ones have a third variant: the crisis just drops out of the plot and is forgotten by the end of the movie, even if it was originally the main motivation for the characters. This goes especially for sci-fi, where it’s allowable to leave on an urgent, specific mission but then forget about it and commence to wander around aimlessly for a couple of seasons.

As you can imagine, the nuclear plant’s owner was at first a bit hesitant to make good on his assistant’s promise dedicate a statue to their noble saviour. As soon as he learned that the guy was invisible, however, he realized that it would cost considerably less than he had feared. Seriously, though, panel six is, apart from the inscription, an actual photograph of…uh…actually, I guess it’s the top of some ventilation shaft for some underground facility. When I first saw it, though, I really thought it was an empty pedestal for a statue that had either been removed, or not yet erected, with all that lovingly arranged plantlife around it.

I’m not sure whether there was ever a statue dedicated to the Invisible Man, but Sideshow Collectibles have a 12 in action figure of him. And they even went to the trouble of sculpting him in the outfit he wears in the original movie before revealing his invisibility. If I had been in their place, I’d just have shipped empty boxes, claiming it was an amazingly life-like depiction…at $ 45 a pop, I’d have turned quite a profit, but then, I always skipped business ethics 101. Anyway, it’s the only action figure I’ve ever heard of featuring a removable nose. There’s a seven piece order limit, however, so if you’ve got more than seven kids, you’re out of luck.

On Monday, the ‘Yay-we-are-still-alive’ celebrations will continue, but is really everyone happy? Please vote.