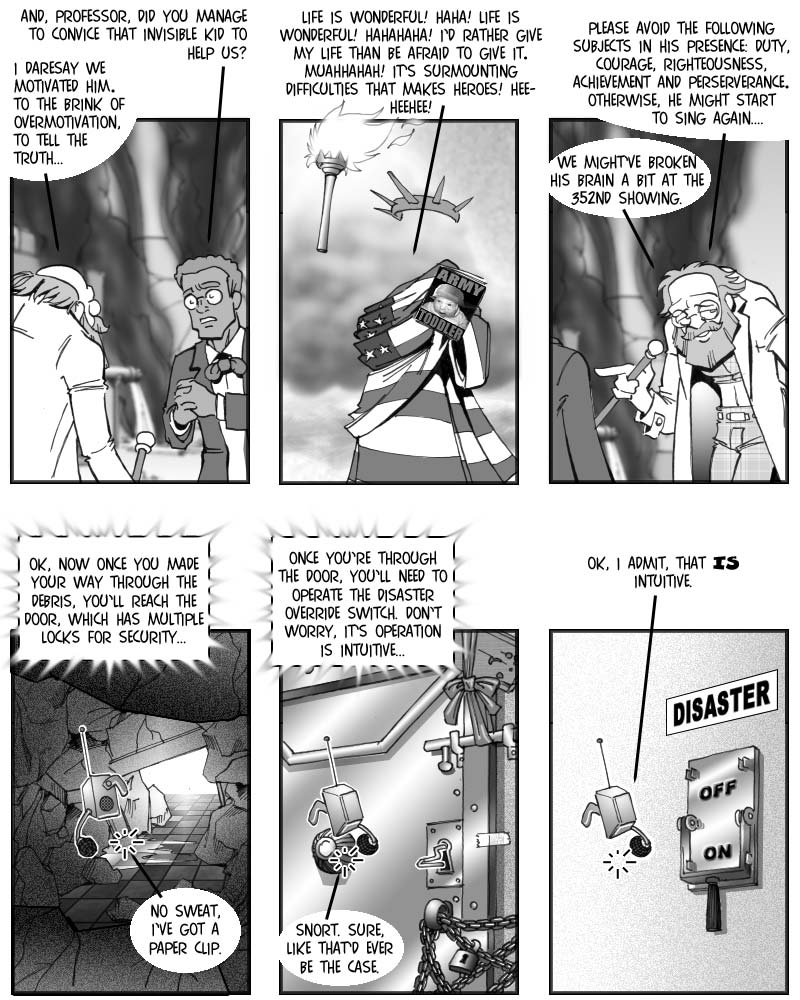 I think the Professor can rightfully claim that ‘Operation: Reform Snuka’ was 200 % successful. Unfortunately, in some cases, 200 % is less than 100 %… Don’t worry, though, I’m pretty confident that the excess of motivation will wear off quickly – that’s always the case with motivational training programs: the results last only until the next paycheck.

And if Snuka is really able to avert the disaster threatening the future of mankind, he’ll know he isn’t alone. History is mostly made by ivisible people.

The locks on the door in panel five appear a bit ‘mix-and-(mis-)match’, but you can’t just buy a completely new door every time the security regulations are thightened. Considerate patronage of the local hardware store can often yield a result that will conform with the new regulations without costing more than a couple of bucks.

‘Intuitive interface’ is an often misunderstood phrase. Customers tend to think it means something like: ‘You’ll understand intuitively how to achieve the desired result.’ IT professionals, however, know that it actually means: ‘If you click around wildly, *something* will happen.’ Thus, Snuka’s mistrust is well founded, but I’ve decided to break with a time honoured B-movie tradition and acutally create a device that looks like it’s name indicates. It’s called a ‘disaster override switch’, and that’s exactly what it looks like – and still some people might have expected something different. =P

Stay tuned for Thursday, when we’ll learn whether the switch also does what one would expect of it. Please vote.