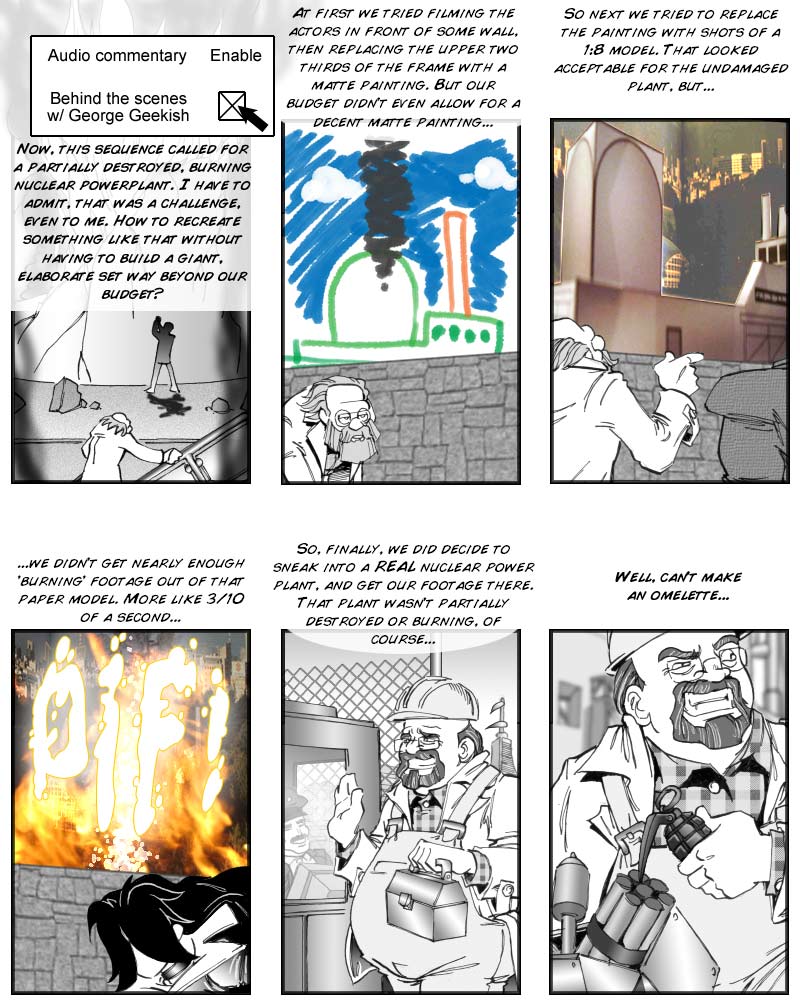 And now you know how much trouble it was to get those ultra-realistic, exiting shots of a burning nuclear powerplant. You might think that a tri-state blackout and cloud of radioactive ash covering half the nation might be a steep price to pay for a couple of scenes in a B-movie, but creating art always involves sacrifices. Often from artists, sometimes from audiences, but ideally just from uninvolved third parties. As a gesture of compensation, the movie’s distributor has agreed that kids with more than one head, or more than three eyes, still have to buy only one ticket to watch – if their mutation showed up after primary shooting, that is. (Offer not valid in Springfield.)

Originally, matte paintings were considered a cheap alternative to sending teams abroad to get footage of exotic locales, back when long-distance travel was still prohibitively expensive. Nowadays you might save both time as well as money by sending a team to China or Morocco, rather than have high-quality mattes created. If traveling continues to get cheaper at that rate, I predict that, by 2021, it won’t even make sense to distribute copies of a movie to theaters any more – you’ll pay 12 bucks directly to the studio, and they’ll send you a ticket to fly to L.A. and watch the movie on the studio lot. =P

As far as panel four is concerned, I’ve never seen, in any movie, a burning model that looked like anything other than, well, a burning model. Paper might be an especially poor (but cheap!) choice for building material (panel three featuring an actual photograph of a paper model I created…uh, in 20 minutes =P), but even with more substantial materials, it seems to be impossible to get a conflagration to stick to 1/8 scale. Blowing up works better, though, another reason why movie villain hideouts always feature inexplicable stacks of volatile substances – or of normal substances being inexplicably volatile.

New voting incentive for today, featuring a glimpse of Harry Potter’s future, as concluded from a random Internet find. On Monday, there’ll be the first glimpse at a new, and hopefully improved, Snuka.