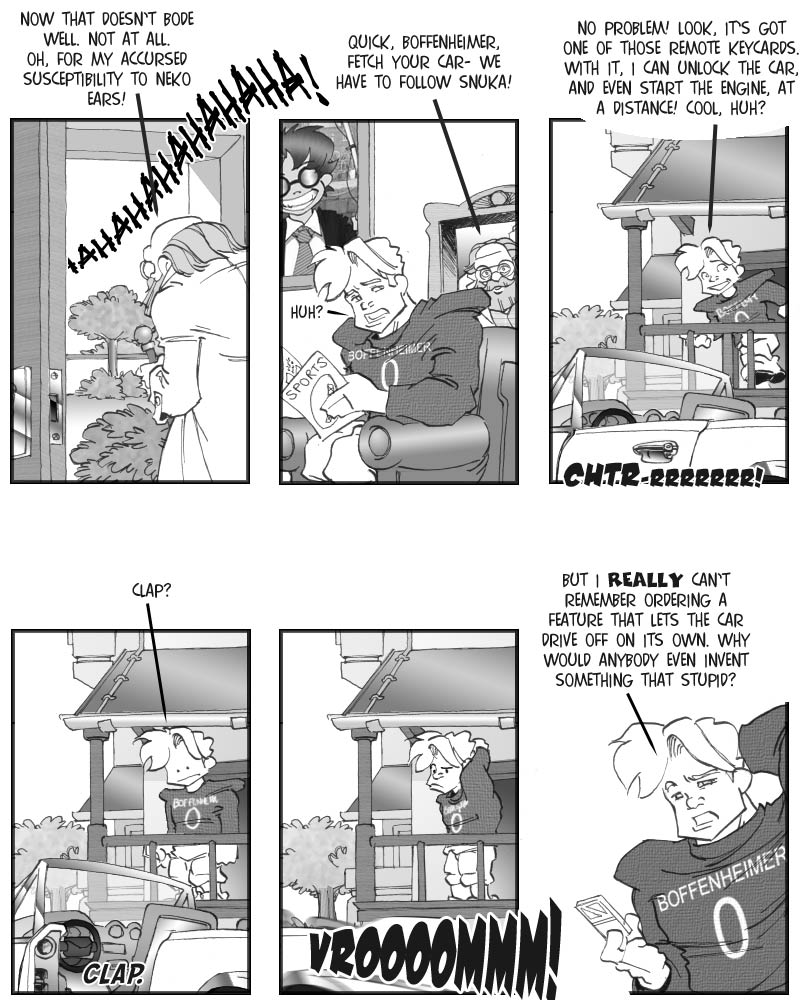 And thus raises the curtain on Invisibile Snuka’s reign of terror, and Professor Doctor suddenly has twice as many invisible menaces to deal with. A high prise to pay for an attraction to neko ears, but who could really blame him – it does look cute.

Yes, while the scientific experiment was going on, Biff was sitting in the other room reading a sports mag – what did you expect? The sum total of his physics knowledge amounts to the fact that Isaac Newton invented gravy, so he isn’t much of a connoisseur of scientific research.

In keeping with his inclination to sports, Biff has a sporty convertible…beats me how he transported three passengers in that. Likely, the professor was folded up on the spare seats, and Snuka had to ride in the trunk.

Speaking of plotholes, how was the professor, in panel 2, planning to follow an invisible Snuka in the car? It’s like he knew, somehow, that the car would get stolen, anyway – the kind of foresight only a shoddy b-movie script could supply.

Biff’s car is decked out in advanced features – naturally, given all the money he earns as an amateur sportsman. This includes one of the fashionable ‘keyless go’ features, meaning that even somebody who doesn’t own the key can ‘go’ with the car. I’m still wondering where the advantage lies in that, but I suppose it’s a security feature – you can get your car napped at a considerable distance, so you are less likely to be hurt by the thief. Somebody more cynical than me might even doubt, in some cases, whether the addition of more electronic features to the same old cars really constitutes technical progress.

On Thursday, there’ll be another little peek behind the scenes (with special guest colour: blue), and the chase for the newly-invisible catboy will commence next Monday. Please vote.