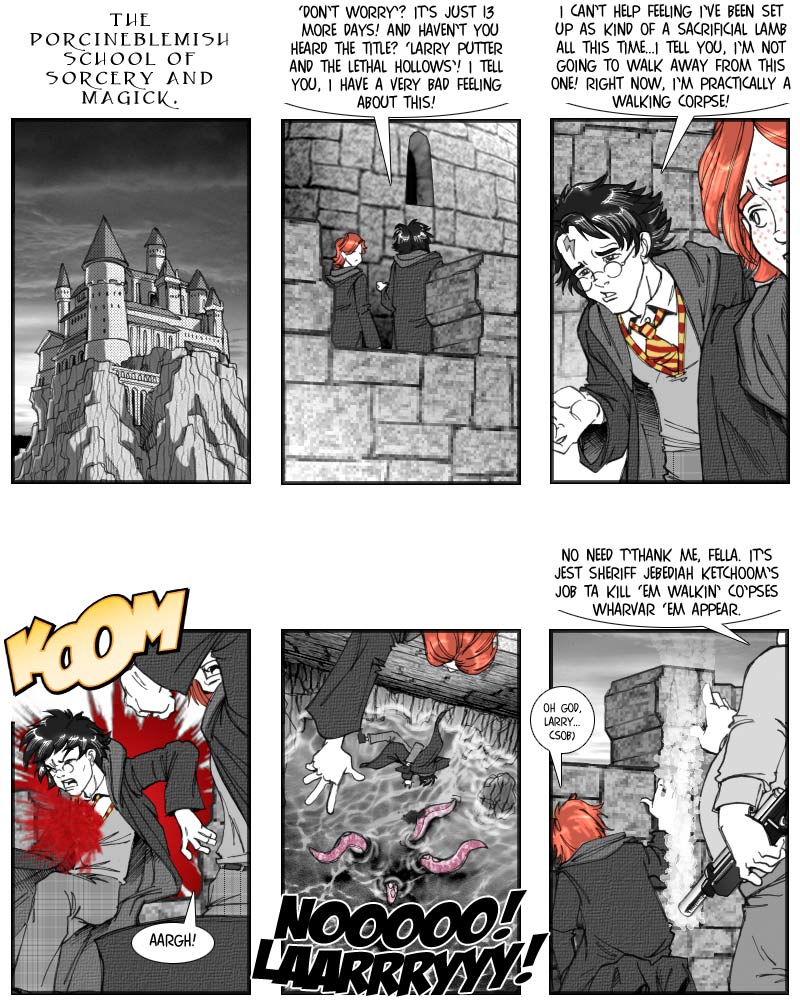 The new sub-chapter starts off with a little update on what the Sheriff’s been up to – as you can see, he’s taking his task of eradicating zombies quite seriously, by now. He’s just a bit unclear on the precise delineation of the concept, unfortunately. Porcineblemish is nowhere near Lillytown, of course, but Sheriff Ketchum occasionally happens to stray out of the boundaries of his jurisdiction – there’s a terrible secret surrounding his ancestry, you know: One of his grandfathers was a Japanese POW by the name of Hibiki.

You might have recognized Larry Putter, boy wizard from the eponymous series of books. Poor Larry had his final book coming up, and that’s why he was a little on edge…in his eyes ‘final’ book already had such an ominous ring to it. His anxiety wasn’t eased any by learning of the book’s title: “Larry Putter and the Deathly Hollows”. And then he learned of the alternative titles the author had considered: “Larry Putter and the Salem Wizard Trial”, “Larry Putter visits Elm Street on Friday 13th” and “Larry Putter in the Inescapable Blender of Certain Death”. Taking all that into account, he might even be better off shot through the chest cleanly and devoured by a giant squid.

Speaking of which: Octosquid! =3 So cute. Two great tastes that taste even better together.

Today’s new voting incentive doesn’t feature Harry Potter…I think I’ll stop picking on him for the short rest of his life, in general. On Thursday, it’s time to kick some real zombie butt, at last.