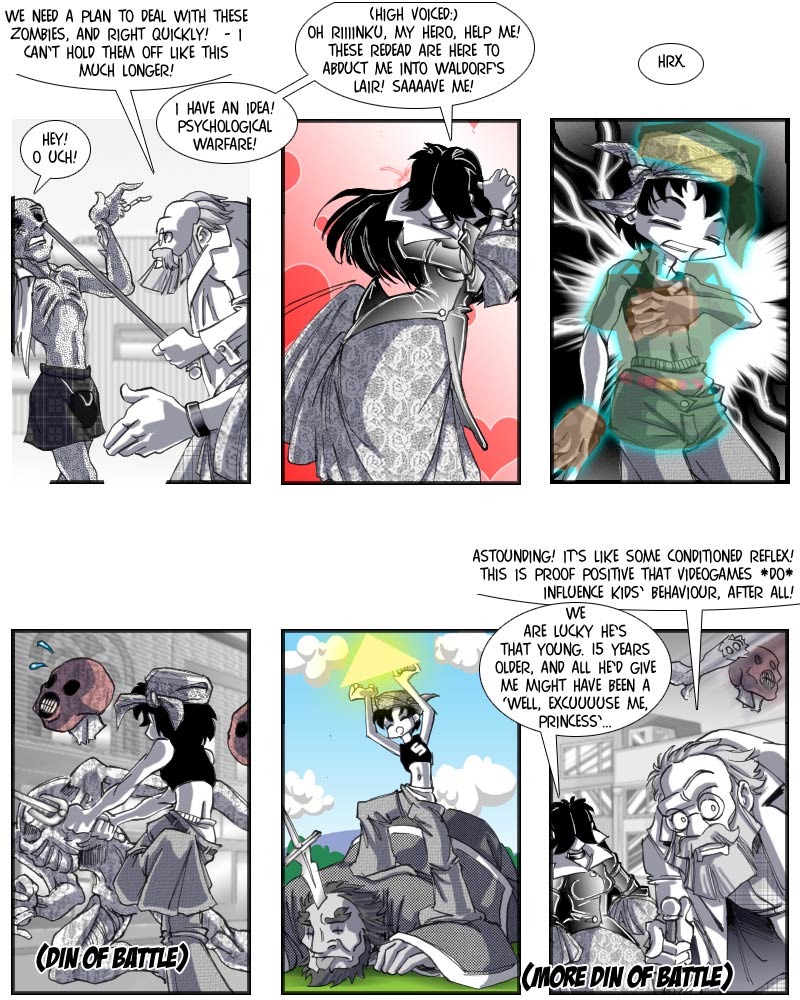 I guess that it must be something like this that all those anti-videogame advocates are fearing: the danger that videogames could condition impressionable youngsters into acting insanely heroic and unquestioningly altruistic – heading out into adventure at the beck and call of the next best princess, armed with nothing but a sword, a two-foot ladder and some kind of obscure musical instrument. With time, America’s youth could get inconspicuously indoctrinated into blind obedience to royal commands – then the British monarchy, armed with their superior numbers of princesses, could sweep in and the American Army would be quickly overcome by wave upon wave of amazingly agile, sword-wielding twerps. And then, just out of spite, they’d re-introduce the stamp tax. (Let’s face it, most of the theories being bandied about regarding the dangers of videogames are about as coherent and plausible as this one.)

Mopey’s remark in panel six alludes to a certain animated TV show from the late eighties, featuring the same videogame character – or rather some kind of odd-ish alternative version of him. For those that have been spared from witnessing that abomination first hand, here are key excerpts.

As regards panel two, Waldorf’s lair isn’t a dungeon, it’s a theater balcony. He shares it with Statler. You still wouldn’t want to get abducted to there.

That Snuka’s sword looks different in panel five than in panel four isn’t a continuity fault…you see, the whole epic story of Snuka’s travails involves prophecies, time traveling and reincarnation, but it all takes place in between the two panels, so that’s not really that obvious.

Thursday’s episode is going to feature videogame elements, as well, although a whole different game. A bit of science news serves as the basis of today’s voting incentive, so it naturally features the Professor.