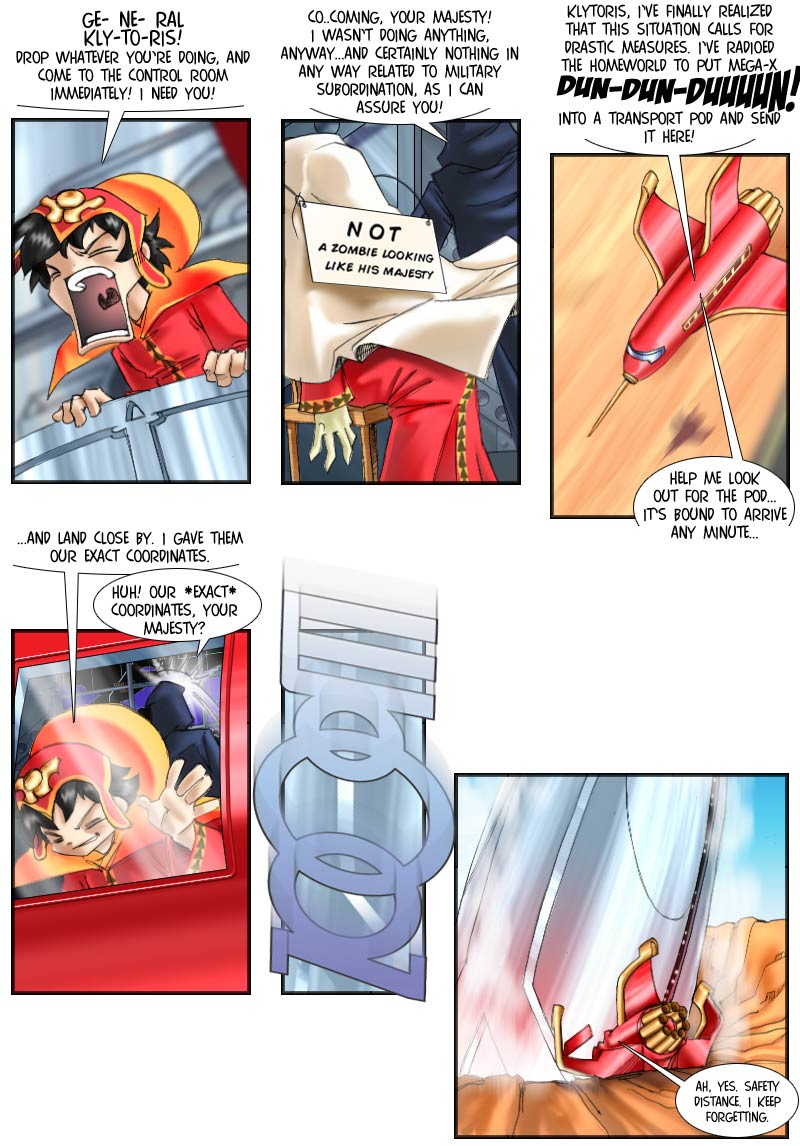 Naturally, a highly advanced (if somewhat pre-owned) interstellar rocket shop is bound to be equipped with sophisticated internal communication facilities, so there certainly would have been a more efficient way to reach Klytoris than by shouting – but that really isn’t the point, as Akuns is aware. Villains have to shout in such situations, even if they have to risk an avalanche or two in the process – it’s not about communicating, it’s about symbolically reasserting their authority while simultaneously demonstrating their violent character and lack of self-control. Plus, it’s just funnier than using the intercom (although I’ll allow an exception to this rule in the form of Star Trek – The Next Generation. It was quite funny how they had to rub their right nipples to speak with someone).

Klytoris, on his part, shows a great deal of cunning in panel two. He apparently knows the risks of trying to hide the true nature of something – you’re practically challenging people’s curiosity, and curiosity is no quitter. If your disguise/decoy/dissimulation isn’t good enough, people will find out the truth. If it is good enough, people will find out the untruth, but that might turn out even less advantageous to your plans. Thus, the only safe route is telling people precisely what they are not supposed to perceive. Case in point.

As regards the issue of safety distance, I’m a bit torn…when discussing B-movies, cases of obviously stupid decisions by characters who should know better are often considered “plot-holes”. While I agree that they most often are the result of lazy/poor scriptwriting (or lack of research), I think such instances can be somewhat justified, at least if used consciously and very sparingly. The sad truth being, people do often behave stupidly in real life, even (or perhaps especially) people who should know better.

For an example: On June 22nd, 1893, the Mediteranean squadron of the British Royal Navy was engaged in maneuvers off the Syrian coast, steaming in two columns. Its commanding officer, Vice-Admiral Sir George Tryon, was flying his flag on HMS Victoria at the head of one of the columns and gave orders for both columns to reverse course by turning towards each other – despite the distance between the two columns being insufficient for such a maneuvre. He must have made a very basic math mistake – either he had confused 90 degrees with 180 degrees, or radius with diameter, but in any case he just had set his ships on a virtual collision course. Tragically, it seems he was such a strict disciplinarian that none of his officers dared question his order, even if, as later turned out at court-martial, several of them had in fact realized how suicidal it was. As (the Victoria’s) Captain Bourke commented: “open criticism of one’s superiors is not consonant with true discipline”. Apparently, he felt that pointing out a superior’s obvious mistake would be worse for the fleet’s morale than seeing its flagship sunk by said mistake, with a loss of 358 lives (including Tryon’s).

So, yes, people in high authority sometimes make the most basic of mistakes, even if they reached their position on their own great merits (Tryon had been an exceptional officer…up to that day). Nothing that Darth Vader’s admirals do in any of the Star Wars movies is any more stupid than some things real-life admirals have done over the centuries with only half the provocation and without any protest from their subordinates – and, yet, when such things occur in fiction it’s somehow still grating on (at least part of) the audience.

Asides aside, this leaves on question: What is the DUN-DUN-DUUUUUN! Mega-X? More on Thursday.