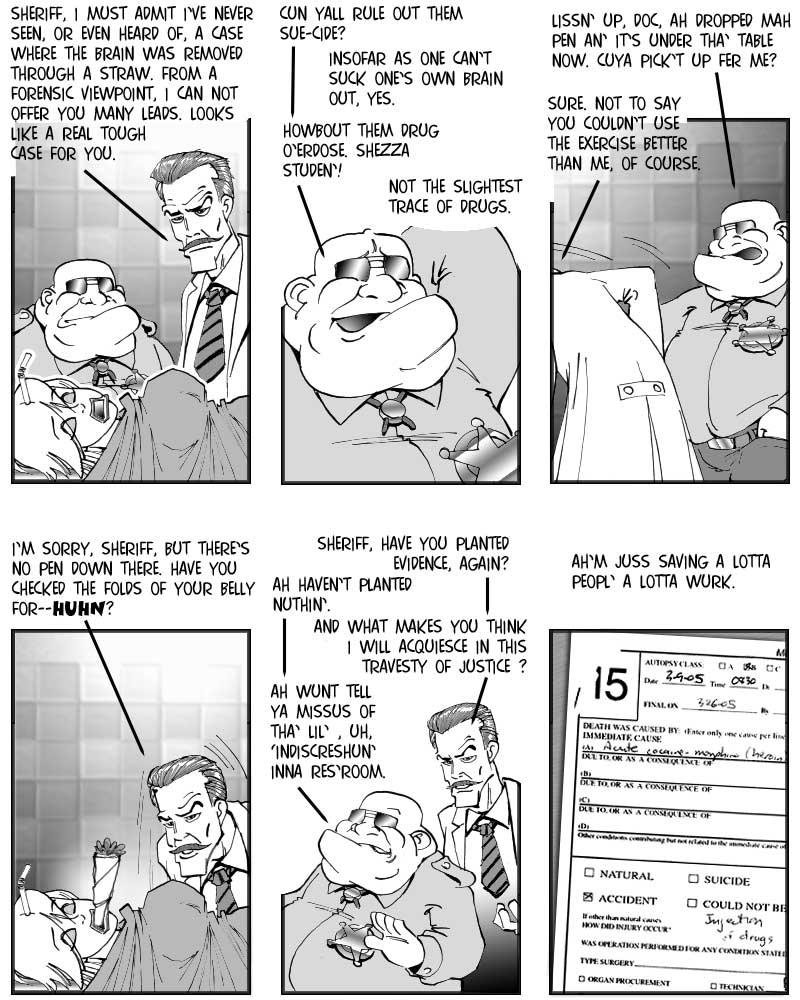 Well, looks like the Sheriff isn’t half as bad as reputation. Whenever he busts some kid for drug possession, and lets the confiscated joint slip into his pocket, everyone assumes he saves it for his relaxing evening in front of the TV. In reality, he just saves it for occasions when he wants to meddle with evidence – totally altruistic, of course. (And yeah, the joint is a bit excessively sized – that’s just for visual clarity.)

So with the Coroner, we have the last major addition to our temporary cast. I just couldn’t pass it up, seeing how popular forensics seem to be on screens of all sizes these days. The romance between movie audiences and any kind of medical activity, especially involving dead bodies, started out very tenderly. When ‘Frankenstein’ came out in 1932, audiences were less horrified by the monster and its murders than by Edward van Sloan showing off two pickled brains to his students. (One of which was clearly labeled as ‘criminal’ – dunno how Dr. Frankensteing could miss that.) Mad medicine then became a staple of the early batch of horror movies, with Karloff and Lugosi and Carradine happily dissecting away at scores of unlucky remains. Still, desensitization was slow – even in the 60ies, an episode of ‘Astroboy’ was considered unsuitable for American TV because of a scene involving surgery performed on a dog. Then, however, came Richard Klugmann, whose ,uhm, unique style of acting could magically turn audiences completely insensitive to anything he did on the screen…So nowadays, there’s just one kind of mad doctors around that can still get a squirm out of moviegoers – dentists!

Bonus test: Could you work as character actor? Try saying: ‘Acquiesce in this travesty of justice’ indignantly ten times in rapid succession.

Of course, after this scene, we’ll need to have the obligatory anti-drug bit on Thursday. Don’t worry, I’ll do that elegantly. *shifty eyes*

Also: a new voting incentive goes up today, taking up what is currently Hollywood’s hottest trend. (Will they ever learn?) And speaking of voting incentives, the ‘Hall of Bygone Incentives’ over in the forum has been updated with entries six to ten – check out wether you missed any – or all of them. 🙂

Title: There’s a coroner in today’s episode, but it’s nothing like ‘Quincy’! Really! I promise!

Text: …Somehow I had the feeling I needed to make that clear…