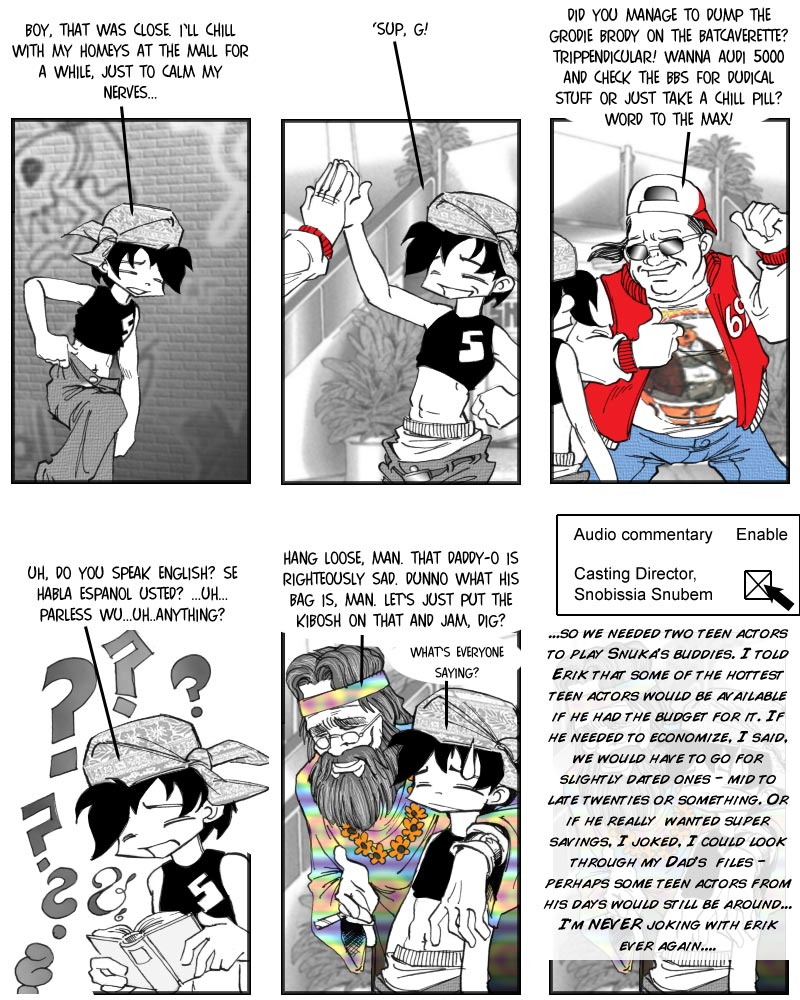 Movies and the elusive creature known as teenager. Also one of the many facets of the ‘B’ in ‘B-movie’.

Filmmakers were a decade late in even realizing that there was something like a distinctive youth culture, and their attempts to cater to it were unmitigated disasters nearly without exception – up until ‘American Graffiti’, that is.

During the late fifties and sixties, some ‘teen’ movies featured a teen lead in his early thirties, with supporting ‘teen’ actors ranging all the way up to forty, often sporting early signs of male pattern baldness. This was then compounded by scripting that either completely ignored the current youth slang, or over- and misused it savagely. (Mostly by consulting dictionaries of questionable accuracy and mindlessly stringing together sentences out of their random findings – uh, like I did for this strip…) The costumes department joined the fray next, and supplied their graying ‘teen’ cast with clothes teens had worn one or two decades earlier, if ever. The effect this all had on teen audiences was unintentionally comical, yet often did not hinder a film’s financial success…

In the Eighties, Hollywood finally caught up with the wayward youngsters, and in the nineties, they caught the golden snitch: They realized that the simplest way to keep abreast of ever-changing youth culture and slang was simply creating it…don’t try and make your actors copy the way teenagers act and talk – try and make the teenagers copy the way your actors act and talk. Like, whatever. XD

With this, we’ll let Snuka chill at the mall for a while (amidst sharp protests by the mall’s management). On Monday, believe it or not, the Sheriff will have this case solved and closed, anyway. And it would be totally groovy and far-out if you’d vote for me, man.

Text: One of the simplest ways to prevent successful communication between two persons is the use of language.