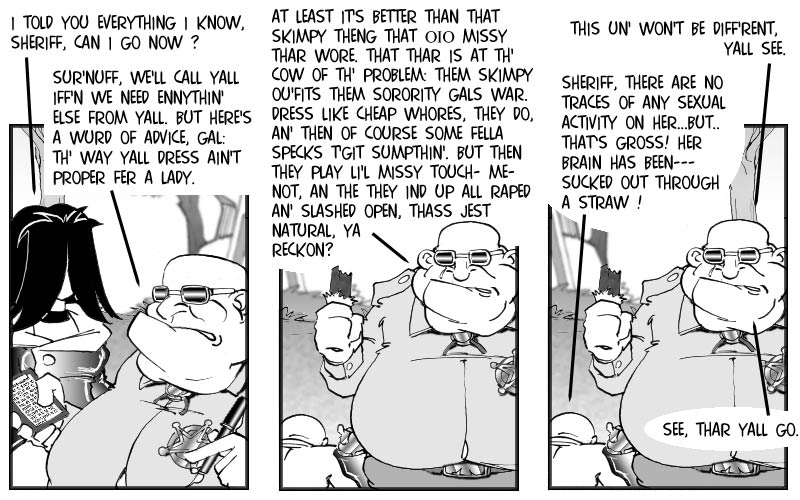 Ah, finally I get to catch up with one more important B-movie stereotype – the incompetent, bigoted, arrogant cop.

In fact, this stereotype has evolved and changed over the course of the years, as far as I can discern. Originally, popular fiction had a positive inclination to men of the law, but in the wake of a couple of widely discussed, real-life failures (most prominently in the case of Jack the Ripper) more and more bumbling cops appeared in fiction. An early example of some prominence would be Inspector Lestrade, whose existence was justifiable only by his dim-wittedness being useful to make Sherlock Holmes appear just that much brighter.

The tradition of brilliant sleuth / dim cop pairings continued into the 30ies, more and more also on celluloid. During the late thirties and early fourties, the handicapped lawmen developed a further trait: violence. As an example, let’s take the character of ‘Lt. Street’ in the James Lee Wong series of movies, which can be summed up concisely as follows: After the initial murder happens, Lt. Street immediately arrests the wrong person on circumstantial evidence. Then he keeps threatening and yelling at that guy until Wong pops up with the real culprit. Roll credits.

During the fifties, police officers then were depicted more positively on average, sometimes displaying outright heroic qualities. But it wouldn’t last. By the mid-sixties, metropolitan policemen were back to their bumbling ways in the movies, while rural sheriffs developed even more nasty traits. Buford T. Justice (from ‘Smokey and the Bandit’) was the archetype of the more positive variant, being ONLY stupid, bigoted, selfish, tyrannical and incompetent. Many of his colleagues in movies were at least corrupt on top of that, if not actually criminal. Especially in the horror genre, the rural sheriff was at least abetting and aiding the villain (or monster), either purposefully or through his incompetence, if he was not actually the villain himself.

In summary, beginning in the late 19th Century, popular fiction in most cases supported the idea that law enforcement was better left to amateurs…

My Sheriff is off to a good start, I think, already displaying that his preconceived notions are completely impenetrable to puny things like facts…

I apologize for the redneck speech – I have no live Redneck available, so I had to use the Dialectizer. 😛

Ah, and the brain sucked out…now could this be a hint? Naw, likely just a red herring. *nodnod*

On Thursday, we’ll catch up with Snuka again. It’s not difficult to guess where he has gone, it’s a place attracting people of his age magically… Please vote!

Title: The Pudgy Arm of the Law

Text: Sheriffs in popular fiction – it started with that Nottingham guy, and went downward from there…