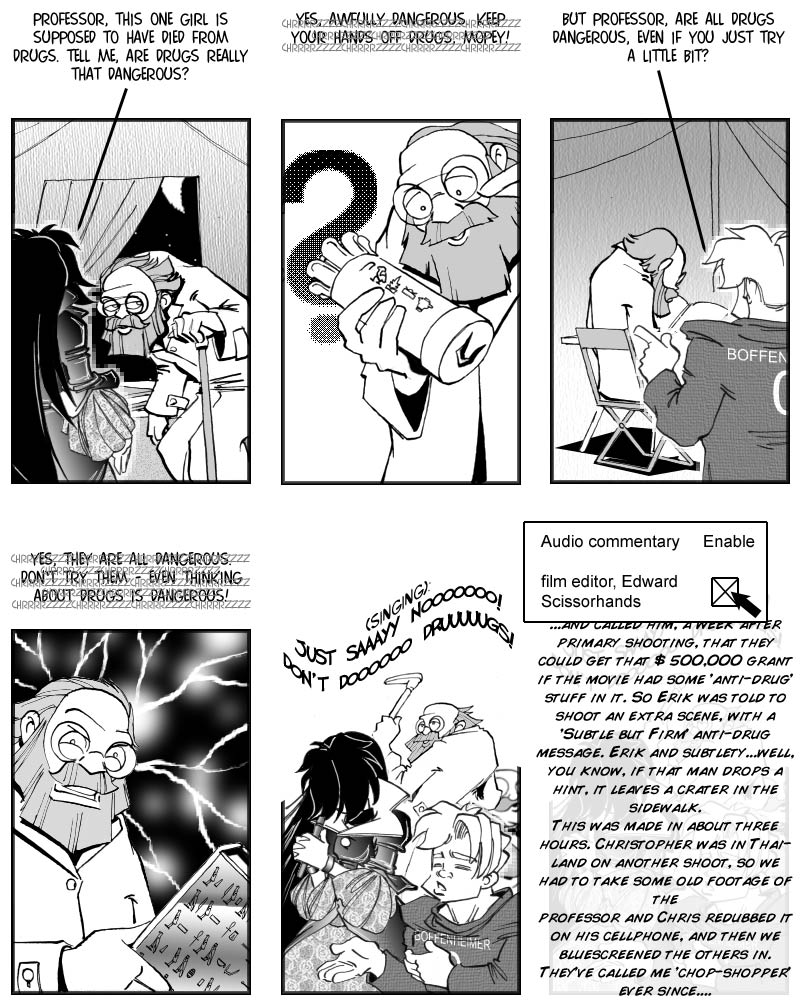 More fanart (-> link to gallery) from Maria and Michelle of Shonen-Ai Kudasai (http:\kudasai.stripspace.com)! This one features the full main cast, and contains an eerily prophetic element. Not telling what. 😛 Don’t forget about their garage sale, too!

Elegantly done in today’s strip, now isn’t it? Woven into the story so cleverly, nobody would ever suspect they added it as an afterthought. Now don’t get me wrong, there’s nothing bad about trying to include some positive message into a movie – but why must it always stick out like a sore thumb? Why won’t moviemakers learn that audiences are actually going to realize whether you are serious about a message, or just added it because marketing claims it would help distribution? ‘Austin Powers in Goldmember’, now that was a movie with a subtle anti-drug message – during the end credits, they had outtakes. And nothing could send a clearer anti-drug message than seeing Ozzy Osbourne, looking twice as old as he is, failing repeatedly to memorize one single line of text for 30 seconds. But no, Hollywood scriptwriters rely on the tried (and failed) approach: have the oldest (and presumably most authoritative) character drone on patronizingly for five minutes, after some totally unmotivated cue. Bonus points if there are no actual arguments, just ‘it is like that because it simply is’. Double bonus for being totally out of character.

And then there’s another thing that keeps astonishing me: During shooting, directors insist everything has to be done a certain way down to the last detail, or audiences ‘would note’. Later, during editing, they suddenly believe they can get away with anything. It’s really okay that they cobbled together one final scene for the late Oliver Reed in Gladiator, to give the character, and the actor, some closure. It’s not okay that, after Peter Seller’s death, they swept the cutting room floor and cobbled together two complete Inspector Closeau movies. (During the later of which co-star David Niven was already so close to Death himself that he couldn’t intelligibly speak his lines – that was later redubbed by a voice imitator.) At that rate, it would almost be simpler to dispose with having a script at all- just shout ‘do something – anything!’ at the actors, keep rolling for six hours and do the rest in post-production.

Of course, if nothing else works, you can always fall back on singing. It’s strange how seldomly you see people unmotivatedly breaking into song in real life – It always works in the movies.

Well, I have a grant to collect…sadly, anti-drug messages in webcomics only fetch 50 cents a pop…so see you on Monday. Please vote.

Text: There’s an ulterior message in today’s strip, but it’s so cleverly hidden, you won’t even realize that it’s not part of the plot…please?