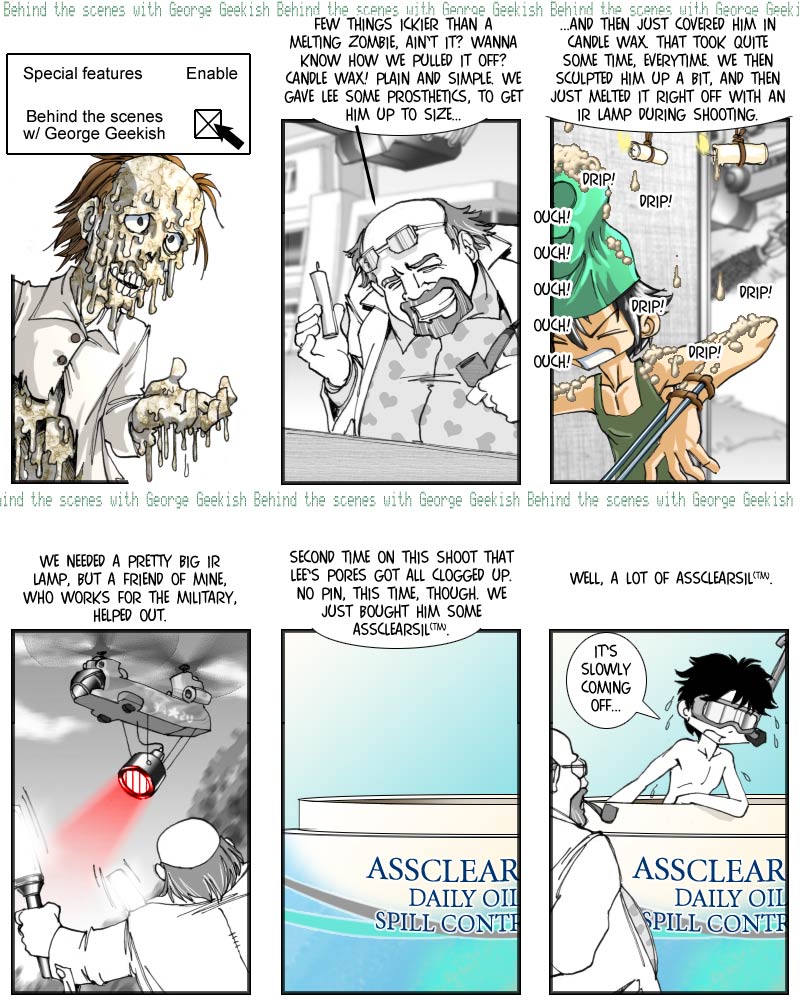 So here’s another glimpse at George Geekish’s unconventional and cost-effective approach to special effects. And, for once, even Lee got something positive out of it all…since all of his pores are now saturated with Assclearsil ™ for good, he will be acne-free throughout all of his puberty. Of course, once Nolan (the producer) realised that side-effect, he made Lee pay part of the Assclearsil ™ shipment.

In reality there are (i.e. were, before the age of digital FX) various ways to create melting bodies for movie purposes. One approach involves stop-motion, but I can’t remember watching a single instance where that created a neatly flowing dissolution effect. Another way does involve actually melting an (up to life-size) puppet made from a suitably meltable substance, ideally a puppet with a skeleton-like inner structure – while this results in a neat dissolution, the main problem here is having the puppet, at the moment it starts melting, look lifelike (or undeathlike) and at least vaguely like the actor playing the part up to that.

A related effect was on of the SFX highlights of the old Flash Gordon serial – a scene (re-used several times) in which Emperor Ming demonstrates some kind of death ray by melting a metal bust. The bust hade been made from metal powder, in a mold, and held together thanks to a huge magneto located under the table. The moment the magneto was turned off, the bust crumbled to dust quite effectively, because that’s actually all it was in the first place. On the other hand, of course, the serial had many, many SFX lowlights, as well…

The use of military resources for movie shoots isn’t as uncommon as one would think, by the way. The U.S. armed forces will occasionally support movies, like “Top Gun”, they consider a potential help in recruitment. In some other countries, governments actively woo movie production companies by offering all kind of support by their armed forces at bargain rates – both on-screen appearance of troops and equipment, as well as behind-the-scenes logistics and transport services.

This episode is, the last respite for our heroes – on Monday, they’ll (finally) head out for real into the zombie-infested town. A new voting incentive for today features the shocking bit of science news that made Mopey bare it all! NSFW, naturally.