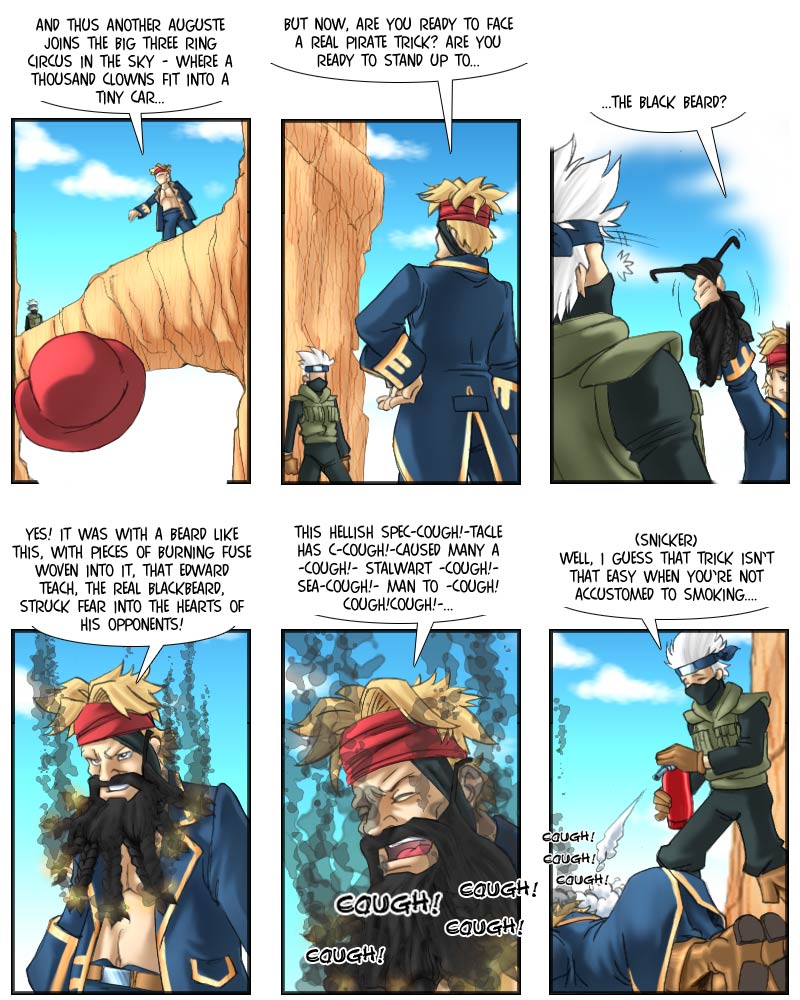 Well, and here we see a round go to the ninja for the very first time – this time it was the pirate trick that wasn’t up to the hype.

Like many popular ideas about the Golden Age of Piracy, the claim about Blackbeard fighting with a pyrotechnically enhanced beard for psychological effect goes back to a book published in 1724, “A General Historie of the Robberies and Murders of the Most Notorious Pyrates”. The author went by the name “Captain Charles Johnson”, but this was very likely just a pseudonym. Some scholars suggest that the author’s real name might have been – Daniel Defoe. Whoever the author was, he unfortunately had little chance to fact-check the various accounts and stories he had to use as his source, and thus some of the more colourful details in the book might be based on exaggerations and embellishments.

I loved pirate stories as a kid, naturally, but I remember that, even back then, I had my doubts about that beard shtick. I just couldn’t see how it would make somebody look more threatening or impressive – wouldn’t it just make you look like some poor chap with a smoldering beard? Not to mention the other obvious disadvantages, like the smoke, or the danger that your beard might really catch fire. And when they actually recreated the effect for the movie “Yellowbeard”, my doubts just grew:

In summary, setting your own beard on fire as a fashion statement might be pretty piratey and badass, but not necessarily an effective strategy in a fight against a ninja – especially if you’ve been a non-smoker all your life…

So this one goes to the ninja, who thus catches up a bit – but the pirate’s still ahead, and the fight can’t last that much longer. Stay tuned for Monday’s episode! (A new voting incentive is up, as well.)