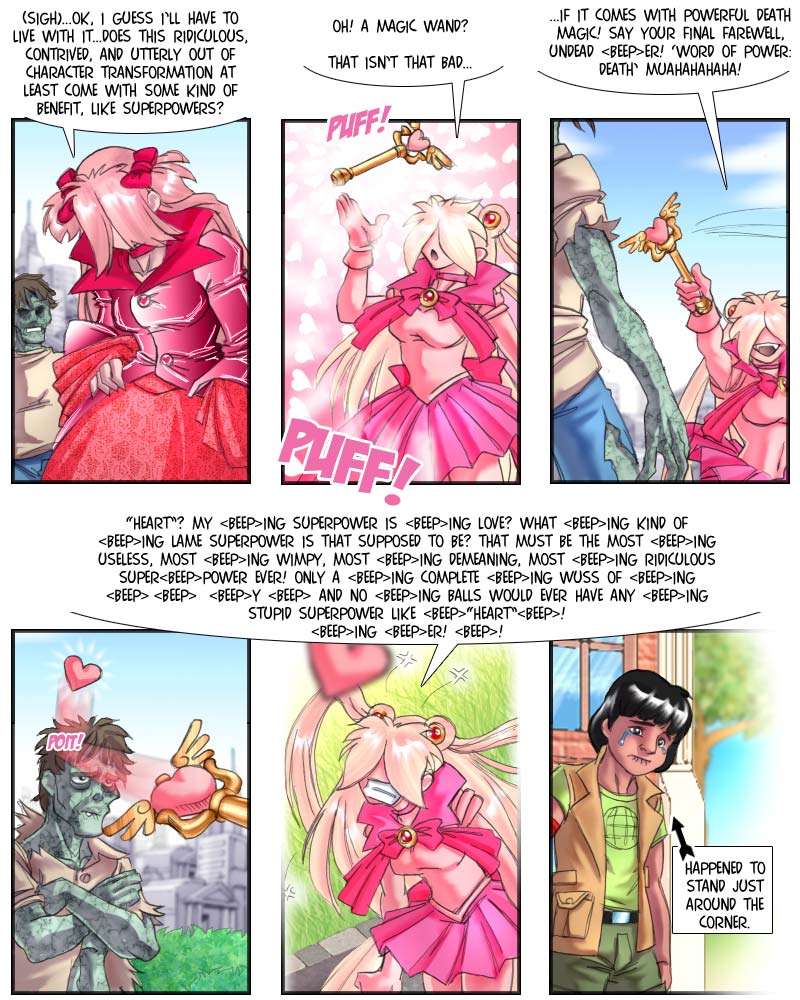 Sorry, Mopey, but magic wands work a bit differently in pretty pink princess land…they don’t serve as convenient containers for lovingly handcrafted death magic and other assorted dark arts. Instead they come with an instant ‘sailor’-type school uniform, and the power of love. And everyone knows that the power of love is the greatest of them all, so you’re even better of than with 1d4 copies of “Mozenrath’s Unspeakable Word of Instant Terminal Cancer”…just not in that direct, being-of-some-kind-of-use-in-a-mortal-struggle kind of way…more like, on a philosophical level.

As panel six demonstrates, however, it’s not always females who get stuck with the power of love for a superpower – on Captain Planet, that one kid got both the idiot ball and the power of love for a superpower. The scriptwriters must have really hated him. To add insult to injury, it was even defined as ethnic superpower in his case – he ended up with the power of love because he was of some vague native South American descent, and thus the most sensitive member of the team. (Yup, really. Some scriptwriter really believed that growing up in the jungle, trapped in a desperate daily struggle for bare survival, would naturally tend to make people more sensitive…after all, everyone knows how all people used to live as brothers, peacefully and content, before industialization came and ruined everything.)

I don’t know what happened to Ma-Ti later…probably something involving group therapy sessions with Chibiusa, Mew Pudding, the Pain and Aqualad. I hope he still managed to grow up into a well-adjusted, happy adult…who’s probably one of the few people trying to keep an adventurous and heroic youth secret later…

Unfortunately for Mopey, while this episode is pretty pink already, I’m afraid next Monday’s might even be sligthly pinker…good thing that that swearword censor seems to be working. A new voting incentive is also up, featuring a popular reptile.