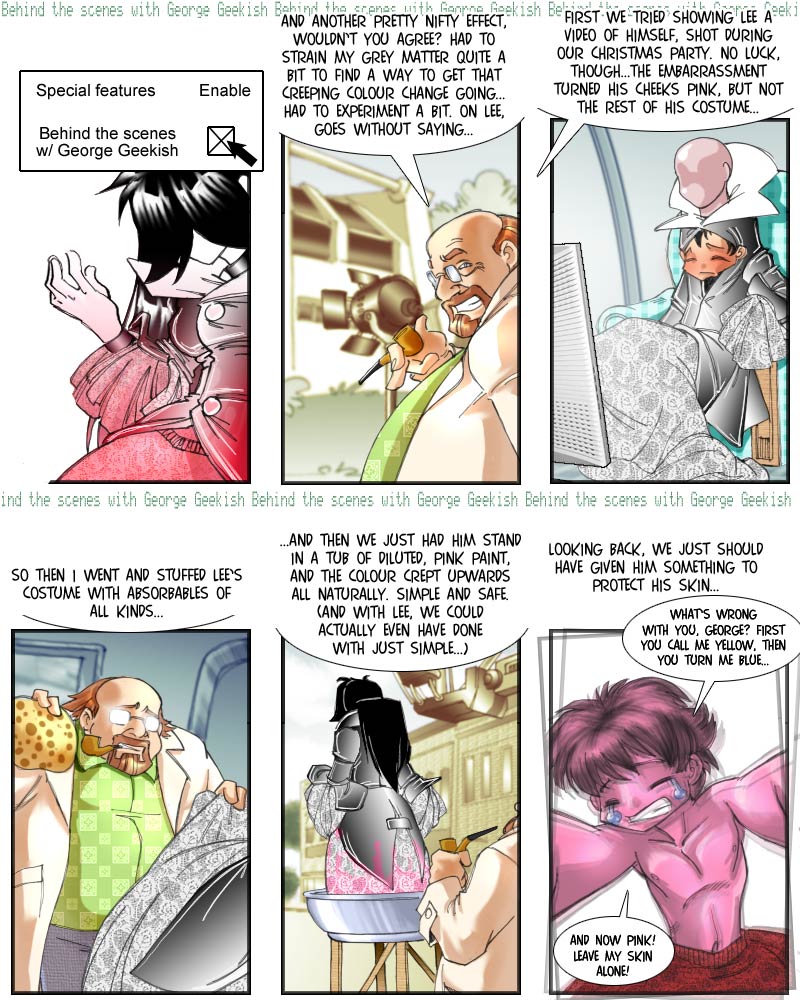 Of course, an even simpler way to pull of that special effect would have been just doing it in post-production, by just shifting around a few sliders. But George just is a little bit conservative, in a couple of ways – he just doesn’t trust digital effects to do a job that can very well and very cost-efficiently be done with a practical effect. Especially if you don’t have to risk anything but Lee.

Sadly enough, Lee’s trials as a person of (radically changeable) colour aren’t quite over, yet…in the course of the making of this movie, there was one more time when he got covered in caustic paint – white paint, at that – but more about that when it comes up in the story.

In case you’re wondering what Lee is blushing about in panel three…well, let’s say that during that Christmas party, Lee learned about the difference between alcoholic and non-alcoholic eggnog, the later one being the only kind he had known up to that point. That experience was quite…heady..for him, and motivated him to spend the rest of the evening giving quite a convincing performance as a Christmas elf in various degrees of intoxication and undress, using various available flat surfaces for impromptu dances and other performance pieces. He woke up the next morning hanging from the Christmas tree’s top by his pants. The production company keeps the tape under lock and seal, naturally, not wanting to risk Lee’s public persona diminished in any way … unless, that is, he should dare to refuse signing an extension to his slave contract, in which case you’ll soon find a free copy of the footage burned on DVDs glued to the front of every Sunday paper. As producer Nolan Nobucks once famously remarked: “The keys to successful contract negotiations are straightforwardness, integrity and blackmail.”

I guess that’s it for today…more of Mopey’s reaction to her sudden pinkness on Thursday. A new voting incentive is also up, bringing together two old childhood favourites.