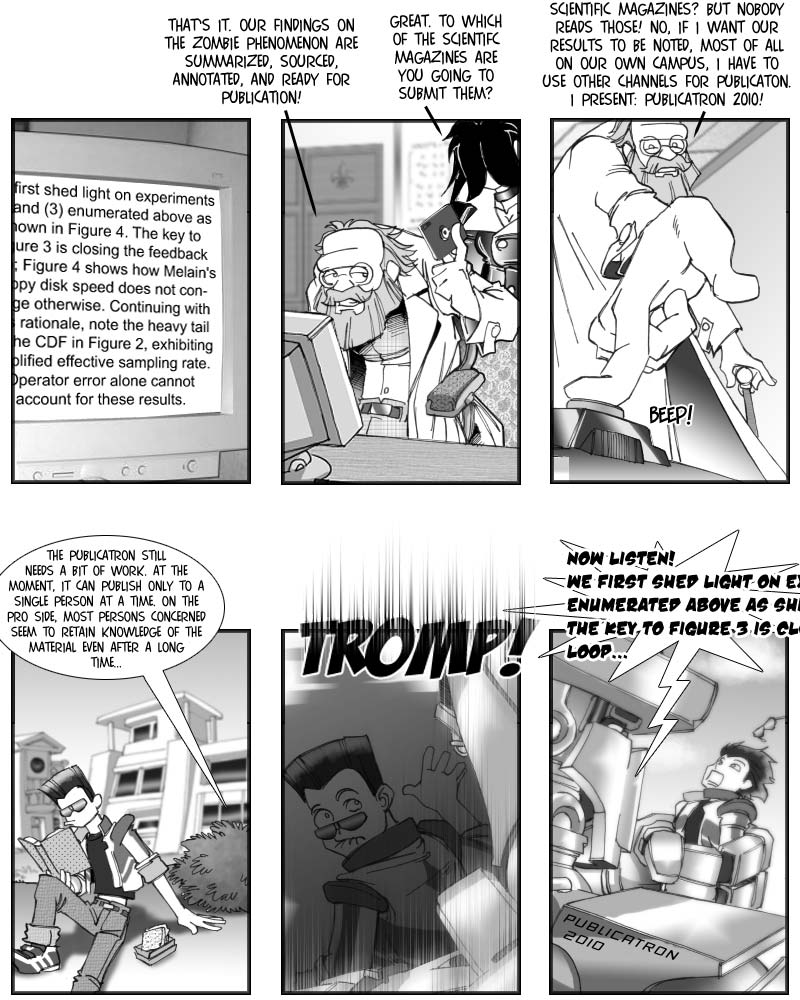 Well, did you really expect Professor Dr. to sit by idly while his newest, earth-shaking revelations drown, unshriven, in the vast sea of new scientific material published daily? No way. It’s not that he was vain or self-important, but he certainly feels his scientific results are not only worth to be arrived at, but also very much worth to be taken note of. And he is a bit unhappy with the way students are these days – unwilling to study really hard, instead devoting part of their time to completely useless, extracurricular activities. Like eating, sleeping or breathing…too bad the Dean would not allow him to enact his ‘focused studying’ initiative. Just canceling all the sports events would have saved enough money to afford all the barbed wire and machine guns he would have needed for it.

Well, the new Publicatron is certainly also a step into the right direction. Early results are very promising, at least. All the students that have been informed of new research results through the Publicatron 2010 are able to clearly remember that material even weeks later. Mostly when they awake screaming from their nightmares, but that’s probably too irrelevant to be included in the Prof.’s final report on his newest creation.

Part of the blame (for all the ruptured eardrums, for example) rests with Dean Martin, anyway – he told the Professor to look for ways to publish scientific papers through new media. And nothing says ‘progress’ quite the way a shiny, giant, humanoid robot powered by a nuclear reactor does.

And the Professor just had to build a giant robot sooner or later, anyway. It’s the only way to achieve the rank of ‘brilliant scientist’ as per the Mangameter of Scientific Brilliancy. Don’t forget: In comics, especially manga, all scientists (including zoologists), and in fact mostly anybody who holds some degree (including dentists) or is willing to devote part of his weekends (including pizza guys) are able to create humanoid robots of standard size (without any people around them noticing, if desired). Thus, the only way to prove scientific brilliancy is building a giant robot. Or a flying submarine. Oops, now I’ve given away what the Professor will give Mopey for her birthday…O_o;

For the bit of gibberish in panel one, I couldn’t find any generator for random anthropology/occultism papers, so I had to use the SCIgen, which just generates Computer Science papers. But I guess they all read the same, anyway…

More on Monday, and please vote.