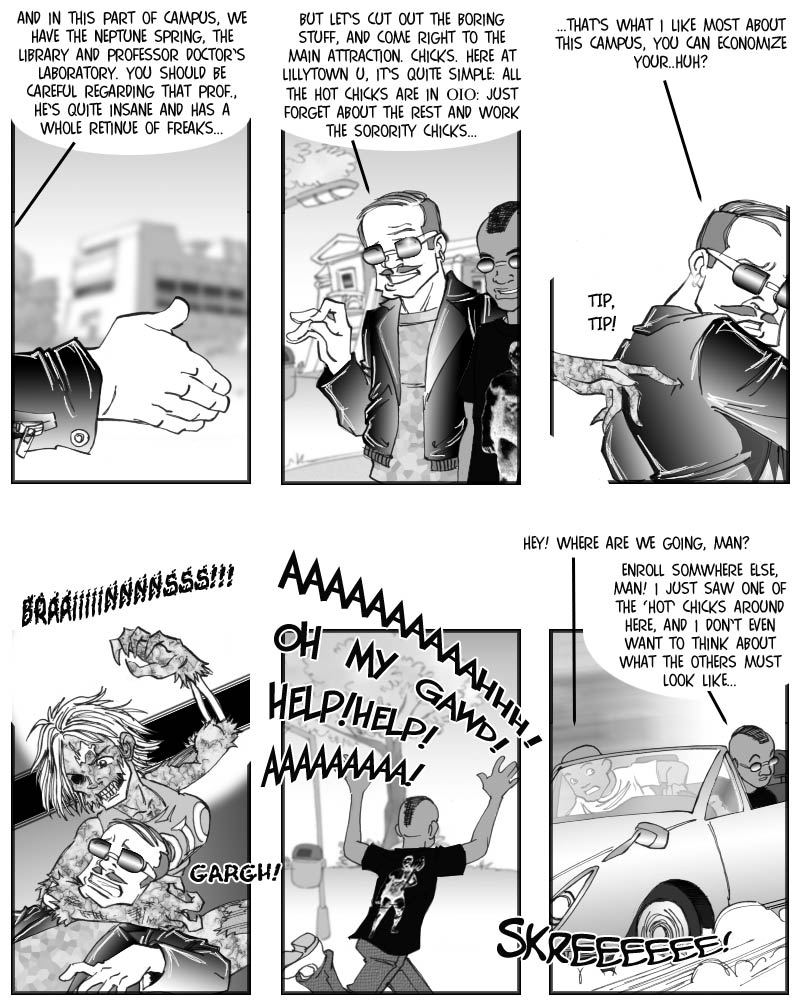 I originally drew today’s strip quite some time ago, but when I was about to upload it, I realized that I had put it in the ‘finished’ folder even though it still needed some minor corrections, which I had completely forgotten about and had to make at the last minute. Sorry for the delay. It’s funny, however, that this strip managed to coincide with the whole DePauw/ Delta Zeta coverage…I guess OIO can’t really risk dismissing their decomposing, brain-eating ex-members from the sorority at the moment, but in this case it will definitely hurt their membership drives.

A ‘good’ horror B-movie requires a whole legion of nameless minor victim characters. Most of them will be completely generic, but a couple will receive short, drastic, unsympathetic characterizations. When one of them ends up having 60 seconds of screentime, they’ve got 45 seconds to make abundantly clear that they are the biggest dick/bitch in existence, and then 15 seconds to die horribly. There are numerous benefits to this – for one thing, it’s highly cathartic. The audience gets to really grow to hate the character near-instantanously, and that tension is then as instantanously resolved when they get sent to meet their maker, often in an exceptionally messy way. It seem, however, that these characters are nearly always heavily drawn from some person the scriptwriter knows or knew in real life, so I bet it’s also a great cathartic experience for the scriptwriter. And it’s also a neat mechanism to reward the regulars amongst the audience – everybody who has seen two or three such movies knows how to recognize such zombiefodder characters immediately they pop up on the screen, so their actual death then always comes with a bit of sweet validation.

As far as panel six is concerned, though, those guys should really reconsider their decision. If they enroll at Lillytown after all of this is over, they’ll likely get to enjoy the perks of a mostly depopulated campus – like a complete dorm of their own for every surviving student. And, no matter what the academic deficits, no professor is going to flunk a student, if he’s only got a single one.

A new voting incentive is also up, featuring another ‘truth behind the news’ bit.

More on Monday. Good night, Mrs. Calabash, wherever you are.