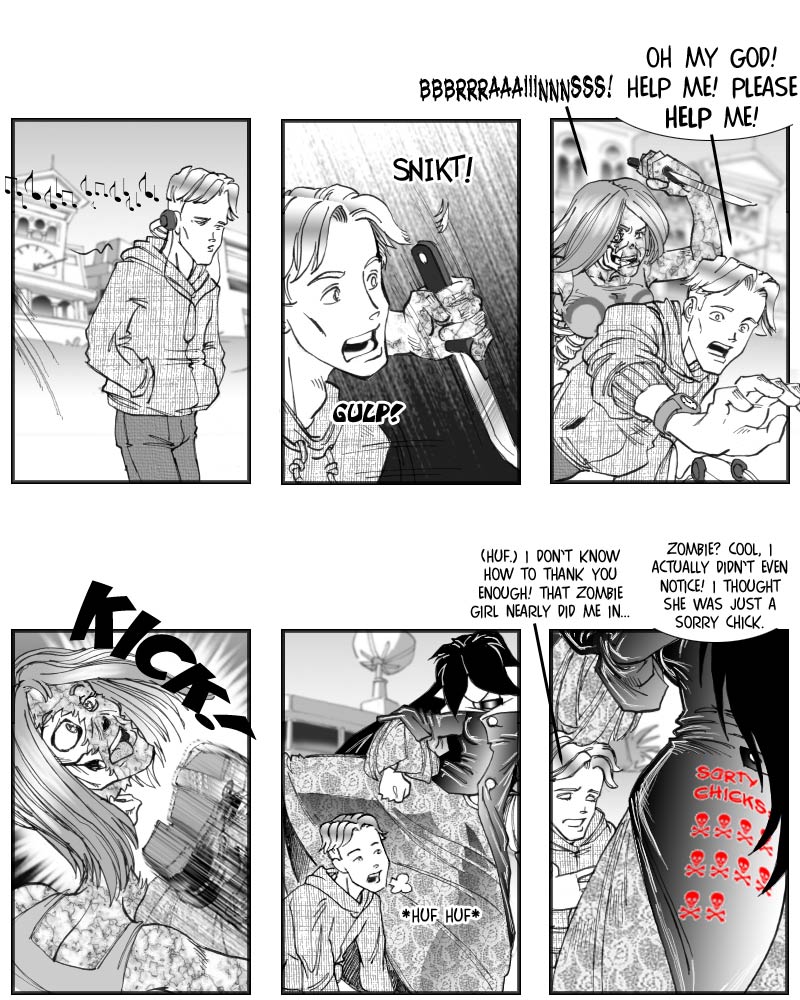 I wouldn’t really say that Mopey has any issues with sorority girls, as such. But whenever an opportunity arises to kick them in the face with her heavy, steel-capped boots…well, who could resist? And those kill marks on her coat…uh, well…in high school, her counselor told her she should try to conform more to the general climate of competition. I guess the counselor meant sports, grades or popularity, but Mopey rather set out to compete with WWI flying ace Freiherr Manfred von Richthofen, who had 80 ‘kills’ – Mopey’s drawing close to that by now. (Of course, Mopey only collects figurative ‘kills’. With people who aren’t undead, the head doesn’t come off quite that easily. One would have to seriously question her character, if she’d really habitually kill sorority girls. Not because of the killing per se, but I’d make her bitching about Gregory highly hypocritical. O_o)

Last week, I mentioned how some B-movie scriptwriters relief the dreariness of their 2-bit, 40 wpm existences by visiting petty vengeance on people who slighted them in real life, by writing them into the plot to be horribly dismembered within short notice. The opposite phenomenon exists, as well. While full-fledged Mary Sues might have emerged only with the spreading of fan fiction, proto-Sues have been around since there’s been bad writing – which has been since there’s writing at all. Don’t believe me? Read Julius Caesar’s “Bello Gallico” or Xenophon’s “Anabasis”. =P Movie scriptwriters, even on B-movies, seldomly get the chance to really turn any of the main characters into a Mary Sue (see Ed Wood, Jr., for one of those rare cases, however), but the least they can do to make themselves feel a little better about…well, being a B-movie scriptwriter, is to create a minor character in their image. These characters often only have very little screentimes, but still manage to shine by virtue of their sympathetic characterization, wittiness, handsomeness and all-around perfectness. And they’ll always get a small semi-romantic moment with the female lead, and they’ll always, always escape completely unscathed, even if the rest of the plot is a non-stop massacre of anything that moves or at least appears like it could.

On a technical note, I’m very proud of myself for remembering to give that guy a wristwatch. I don’t know why, but I nearly always forget that – and in a modern day setting, there should actually be precious few characters who don’t wear one. Strangely enough, I seem not to be the only webcomic creator with that problem.

Today’s voting incentive deals with one of the candidates for next year’s presidential election. More on Thursday.