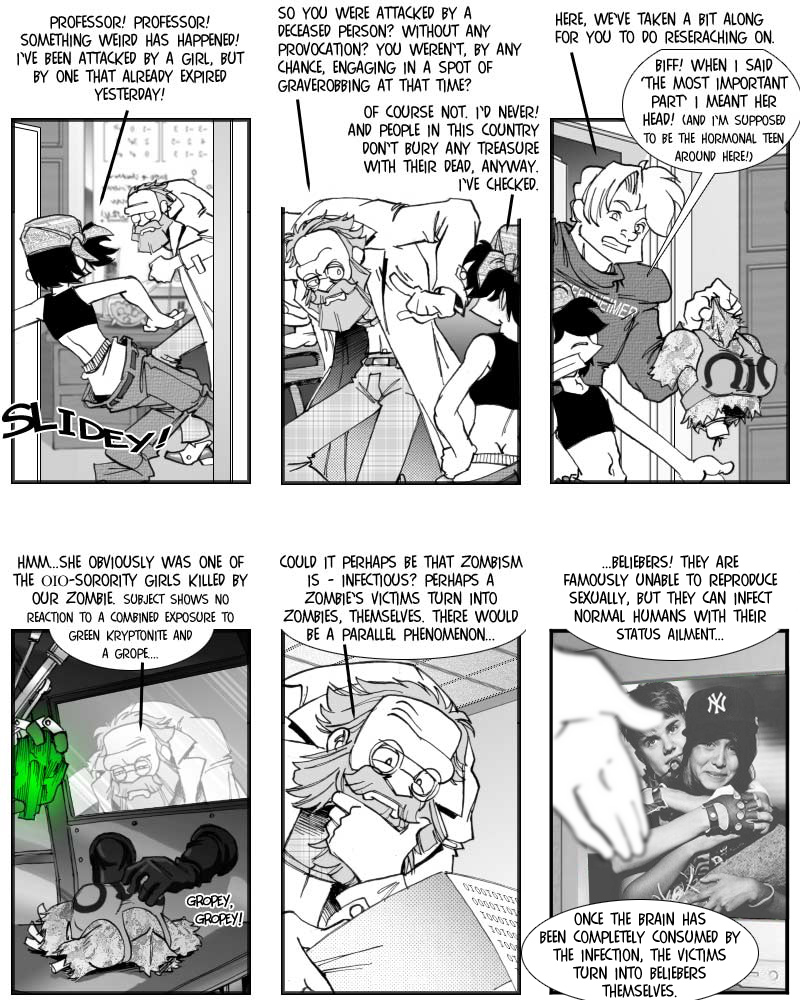 This lovely pic of Mopey has just about the perfect attitude, both in the fore- as well as the background. Heaps of thanks (and cranberry) to its creator, CJ Burgandy. More of her great art can be found in her two webcomics, here and here (reportedly coming of hiatus this week!). Both webcomic links are safe for work, but the second one only if you work in the adult industry.

As Snuka freely admits in panel one, being attacked by a girl isn’t all that uncommon for him – just being attacked by a dead girl. Naturally, he usually earned it. On the whole, as panel three attests to, he is still slightly less chauvinistic than Biff, however. That’s probably also the reason why he hasn’t yet taken up Biff’s habit of wearing football protective gear at all times.

The quaint habit of burying assorted valuables alongside the dear departed has, regrettably, completely died out in Western culture, as Snuka correctly observes in panel two. Of course, when some B-movie scriptwriter needs to motivate characters to break into a crypt, this fact can be freely shunted aside – see “Frankenstein meets the Wolf Man”, for example. Why the two would-be graverobbers in that movie keep on searching for those elusive funds, even after noting that Mr. Talbot’s body is, inexplicably, still completely undecomposed and, suspiciously, covered in wolfsbane…

Yes, Professor Dr. has a piece of green kryptonite. Come on, doesn’t everybody? It’s startling how much of that stuff is around. Either Krypton was an incredibly big planet, or the blast at its destruction was, for some reason, directed at our solar system. The test the Prof. is seen performing in panel four is called ‘Supergirl experiment’. The kryptonite is elementary in order to survive the test, should the subject really turn out to be Supergirl.

Perhaps you think I’m being a bit harsh with civil servants in panel six? Well, I admit that it differs from jurisdiction to jurisdiction. In some places, they aren’t quite that bad. They might have fewer tentacles, and their stinger is supposedly less poisonous.

Speaking of incentives, the ‘Hall of retired incentives’ has been updated with ten more incentives of ages past. More on Thursday.