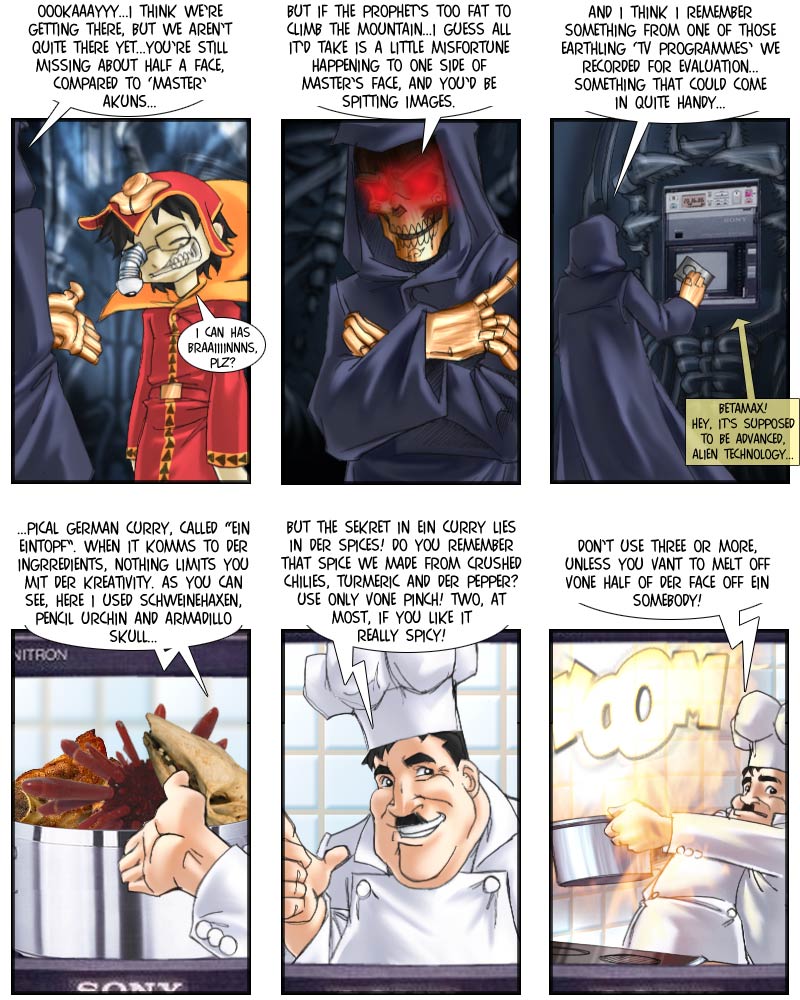 Klytoris is likely misremembering that proverb in panel two – I think it goes more like “If the mountain won’t come to the prophet, the prophet will have to go to the mountain.” And that solution is not only pragmatical, it also avoids the massive collateral damage inevitably involved in having mountains move around (which might still be less than the collateral damage caused by a prophet, of course, but that’s a different problem).

Of course Klytoris could simply have fallen back onto the highly implausible effectiveness of masks and make-up in B-movies, where all it takes to make one character look completely alike to some other character is a latex mask – in result looking deceptively like they were actually being played by the same actor. But he went for a more subtle solution – now that he has suddenly become a villain in his own right, he is clearly subject to the laws of villain inefficiency and unnecessary grandstanding.

Fortunately, B-movie Aliens have that habit of intercepting and monitoring Earthling TV. Normally, you’d expect that any intelligent extraterrestrial lifeform who has seen even a bit of Terran TV programming would try and avoid our solar system at any cost – unless they happen to receive Fox, in which case you’d expect them to just blow up the planet. But B-movie Aliens tend to persist in their plans of conquest despite of all TV broadcasts received – although it might be simply in order to put a stop to the broadcasts. Klytoris, in any case, managed to glean some useful information from a TV broadcast, here – and I guess that’s not a common occurence even for non-aliens…

I have to admit that I’m not sure which ingredients go into German “Eintopf” – I have seen the finished product, but it was pretty hard to tell by that. I’m relatively confident about armadillo skull and pencil urchin having been in there, but Schweinehaxen is a bit of conjecture – perhaps I could have told by actually tasting, but…naaaw.