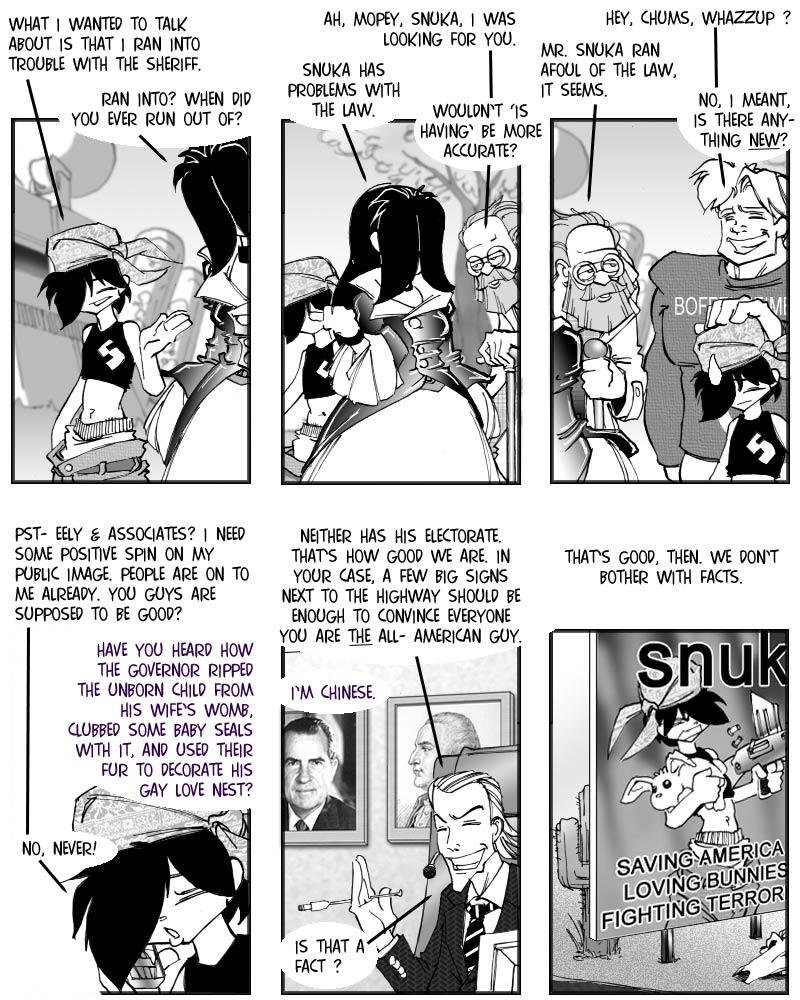 Due to scheduling issues, the Monday update is posted a day early – in case you are reading this on Monday or later, ignore this – the update was posted exactly as scheduled. These are not the droids you are looking for.

And here is presented further evidence how well Snuka has already adapted to his unwilling adoptive country…a place where everyone is considered innocent until he can no longer afford to hire professional spin doctors that keep it that way. I know a professional spin doctor usually employs more subtle means than big signs next to the highway, it’s just that I couldn’t come up with anything more subtle. As far as the portraits on the wall in panel 5 are concerned, I’m aware that both gentlemen depicted (the right one is Benedict Arnold, by the way) are not exactly prime examples of successful spinning…but that’s exactly the problem, nobody knows who is.

OK, let’s check for B-movie mechanisms in this one…for example, panel 2: In a well-written script, characters don’t just run into each other, a plausible reason is given for the encounter…the B-movie solution is simpler: ‘I was looking for you, anyway’- and then just drop it there. If the following dialogue is just confusing or irrelevant enough, the audience will forget about it, and never wonder why he was actually looking for them… Note that Biff’s appearance doesn’t need any rationale at all…given his intellectual capacities, you can just assume he is wandering aimlessly if not given specific orders, or drawn to the cafeteria by hunger.

I also like that bit in panel 4: In a good script, Snuka would have to go to some considerable lengths to talk to someone else without fear of being overheard – just like in real life. In a B-movie, it’s enough just to go ‘Pst’, and the audience will know that the following conversation is completely impossible to hear to the persons standing immediately next to Snuka…who are probably occupied just wondering why he is holding his cell to his mouth and not saying anything. Of course, in an opera this principle would even work with a 50 person chorus repeating every word said, and a fanfare before every sentence.

In case you wonder, I was not thinking of any particular governor. Could be any. XD

On a side note, Snuka has now officially confirmed that he is Chinese…but this is a B-movie comic, so I’ll just ignore that and retcon him to Japanese or Mongolian if I feel like it at a later date. XD

Title: Spinning Out Of Control

Text: Every now and then, or rather every other week, Snuka feels his public persona needs some polish.

On Thursday, our newly assembled Avengers will start to move into the direction of plot. Please vote.