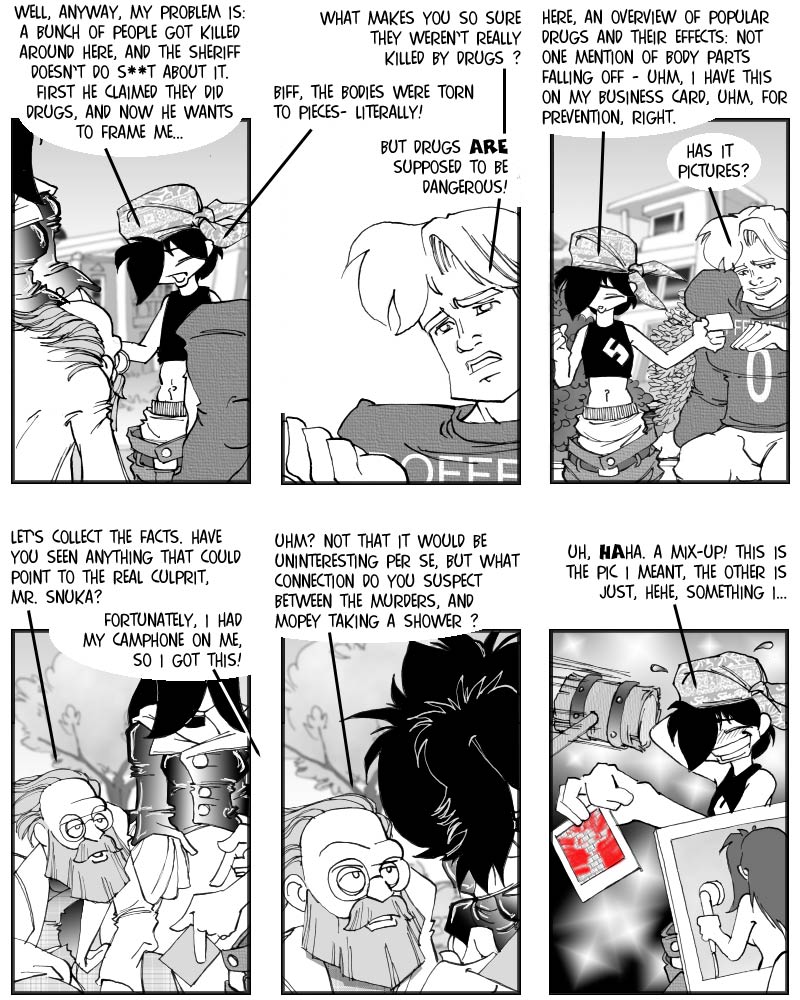 First off, there’s a yumyummy new fanart by Maria and Michelle of Shounen-ai Kudasai (link) in the fanart thread in the forum (link). Featuring: a mysterious bishounen – who could this beautiful, sad-looking stranger be? (Don’t forget to check out the new stuff in M & M’s garage sale, by the way)

As you have probably guessed, the mallet entering the final panel from the left is something normally stored in Mopey’s private ‘hammerspace’ cubicle, she was last seen using it repeatedly on Biff near the end of chapter 1. And since Snuka will likely not be able to finish his sentence, perhaps I should offer some clarification on his behalf: Snuka is not taking these pictures for any prurient reasons. He is just selling them to…interested parties… (And yes, that makes his lingering in front of the ladies’ restroom in strip No. 101 even more suspicious.)

But while we are on the subject of Snuka being wrongfully suspected, don’t read too much into the strange things he has on his business cards, that’s just because he volunteers as a drug counselor. Although he might have misunderstood the concept a bit…I don’t think you are actually supposed to offer reviews and recommendations in that job.

For Biff, the written word and pictures just belong together. Preferably in the combination big picture/ small (redundant) caption. What I’m trying to say is, if you don’t have Hollywood-grade good looks, don’t let him design your tombstone. Biff has only vague ideas about the dangers and side-effects of drug use, because most of the awareness campaigns are emotional rather than argumentative, and because he himself never has taken any drugs. To his knowledge, that is – he still believes the pills his coach gives him are only candies. (‘ Don’t worry, Biffmeister, just some sweets. You know, sugar…good for building muscles – you’ll be amazed. Uh, just don’t, you know, worry if your pee turns green or something…’)

The thing Snuka has photographed (valiantly risking his life in the process – even if he didn’t know it at that time) is the mysterious silhouette in non-blood from the restroom wall. What will the Professor be able to make out of that hint? Will Snuka survive his well-earned hammering? Will more nudie pics of Mopey pop up? Find out in next Monday’s exhilarating episode! (If you can no longer stand the tension, vote! Not that that would do anything about the tension, but anyway…)

Title: The Swift Mallet of Justice

Text: A young person’s mind is naturally curious, always trying to find out how things work, and discover sights as yet unseen. Of course, more mature persons need to enforce certain limits on that behaviour. That’s what mallets were invented for.