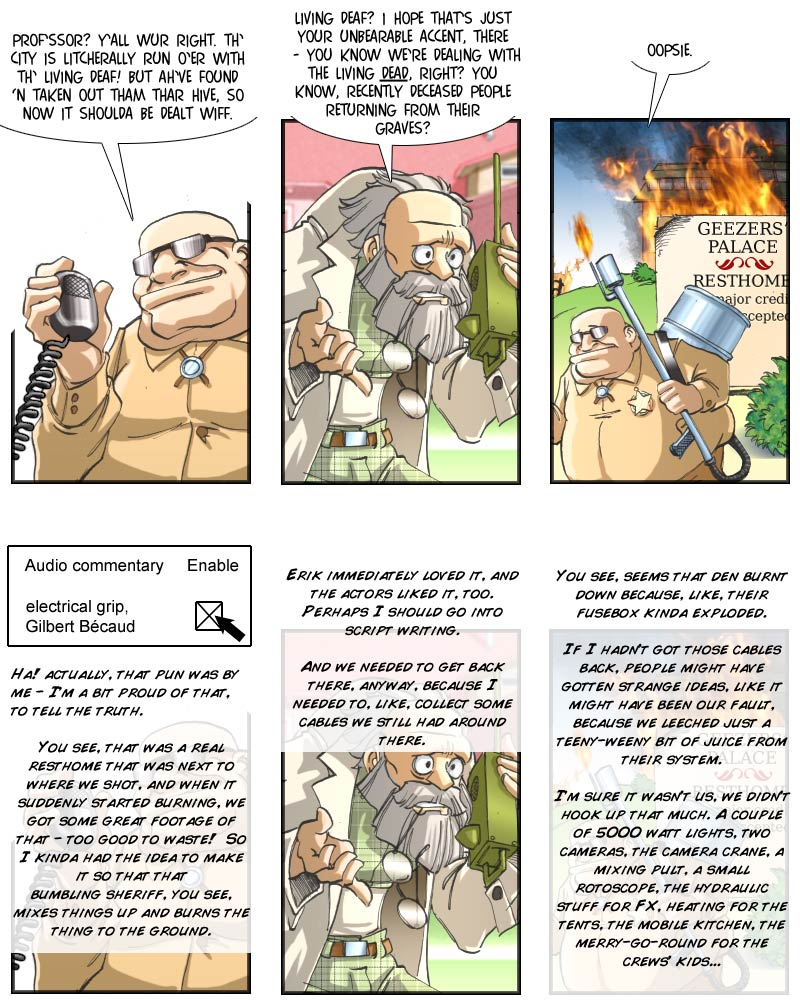 Torching the local resthome was definitely one of the less proud moments in Sheriff Jebediah Ketchum’s law enforcement career – and some people would maintain that that’s indeed saying something.

And that after so many of the resthome’s residents voted for him in the last election, convinced by his slogan: “Jebediah Ketchum – a tough sheriff for a safe and orderly city”. Funny how that worked out.

The Sheriff is a political survivor, however, and will quickly adapt to having to fish for more of the young voters next time. He has already lifted the teenager curfew, and also all restrictions on baggy pants and visible underwear. His new slogan is also already all ready to go: “Jebediah Ketchum – a fun-loving sheriff for a rejuvenated city”. Speaking of rejuvenation, thanks to Ketchum’s little gaffe with the geezers, the city has at least managed to achieve the mayor’s stated goal to decrease the average age of residents – so you see, if you want to hear happy news, just don’t look for the truth behind statistics.

Flamethrowers, in their modern form, have been around since WWI. During most of the 20th century, they were banned by international treaties or officially removed from arsenals after every major conflict – only to pop back into existence shortly after the start of the next conflict. Hollywood SFX guys love the device, naturally, for the spectacle it provides – although California is one of the few states that limit private possesion. Obviously, movie production must count as a legitimate civilian application…

For today’s look behind the scenes, a crewmember we meet for the first time – should I make the obious joke about electrical grip? (His name, of course, was not chosen totally randomly. =P )

On top of it all, Sheriff Ketchum also features in today’s new voting incentive. I just hope that’ll be the last we see of him for a while, though. More on Thursday.