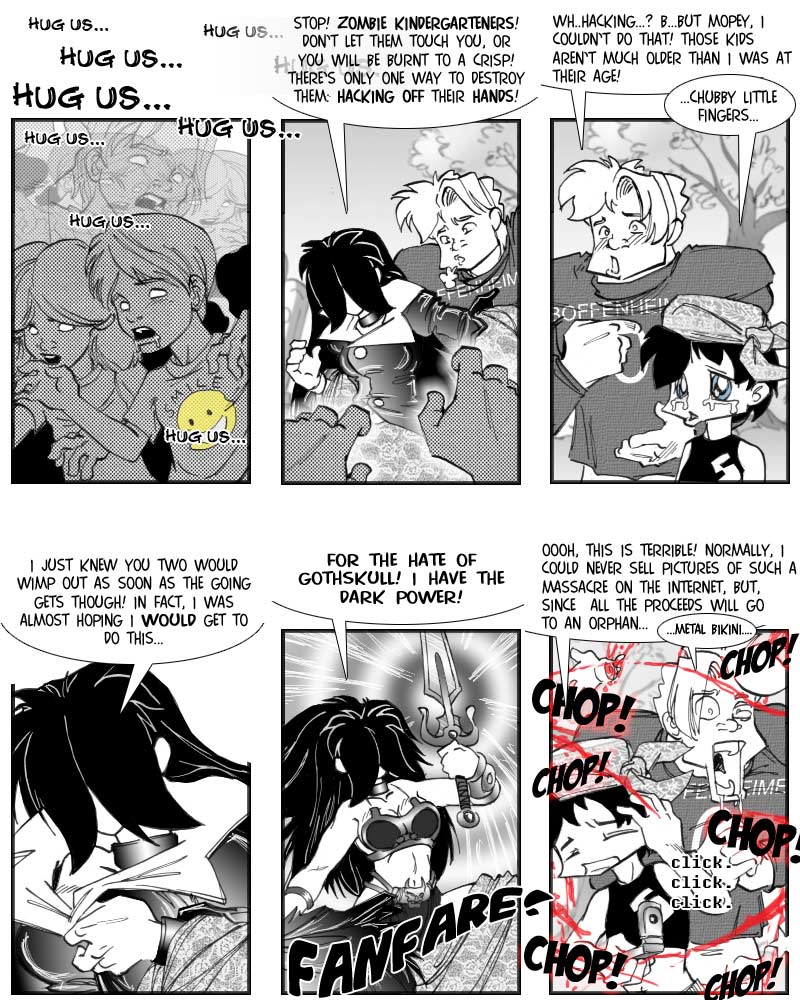 This episode is, of course, inspired by the movie The Children. Said movie features a busload of schoolchildren, whom a radioactive cloud transforms into … uh, well, the movie isn’t quite clear on that…mutant zombies possessed by demons? Apparently they felt they should try and cover multiple bases with their little monsters… Anyway, in addition to making them look like the kid from The Exorcist, the radioactive cloud also gives the children some kind of ‘burning hand’ syndrome – plus an unquenchable desire to kill, kill, kill…wait, let’s blame the latter on TV. Bullets cannot stop the devilish youngsters, but then the local Sherriff accidentally discovers that they can be killed by cutting their hands off…and, with a whack-whack here and a whack-whack there, the matter is solved. I bet that that Sheriff’s chances for reelection would have been pretty remote, after that. It’s funny how the script unabashedly exploits the emotional value attached to children, and then still has them mercilessly mutilated and killed by the heroes…I’m just glad George Lucas didn’t (AFAIK) see this movie before shooting EP III, or Anakin would perhaps not been off-screen while taking care of those younglings.

Still there’s a good reason to watch the movie: after you’ve done that, you’ll never perceive the phrase “think of The Children” in that same old way again.

To enable this little hommage, I had Gregory slaughter his way through a kindergarten a few episodes back…enough raditation was around already, given what had happened at the reactor. There was no doubt, of course, as to who would get the whacking done…Biff could never hurt a child, and Snuka and the Professor could only when there are important scientific or monetary goals in question. (Note Snuka’s rarely seen eyes in panel three – that’s not something he’s doing often.) Mopey, however, has no qualms about doing what’s necessary, and doing it with style – in this case, 80ies fantasy heroine style. Said style centers around the assumption that female armor, unlike male one, would not endevear to maximize protection, but rather cleavage – it generally consisted of a kind of bikini made of metal. While I accept that there is little historical precedent to go by, when it comes to female armour, I still wonder if there might not have been a tiny bit of exploitation involved in those design choices…somehow, that choice of body areas to be protected appears illogically limited to me.

One important thing: Mopey is mimicking He-man in panel five. She is, most definitely, *not* mimicking She-Ra…in fact, never even mention She-Ra to her face. You’ve been warned.

Panel Six sees Snuka engaged in his habitual philantropy…yes, he does give a lot of the money he earns…well, let’s say ‘he makes’…to charity. More specifically, he makes sure it benefits orphans, like himself. To avoid unnecessary administrative expenditure, he usually has it benefit the orphan closest at hand…like himself.

Tune in Thursday for the grisly aftermath of this scene, which will also, however, show off yet another unexpected side to our dear Mopey. Today’s incentive features the Sheriff.