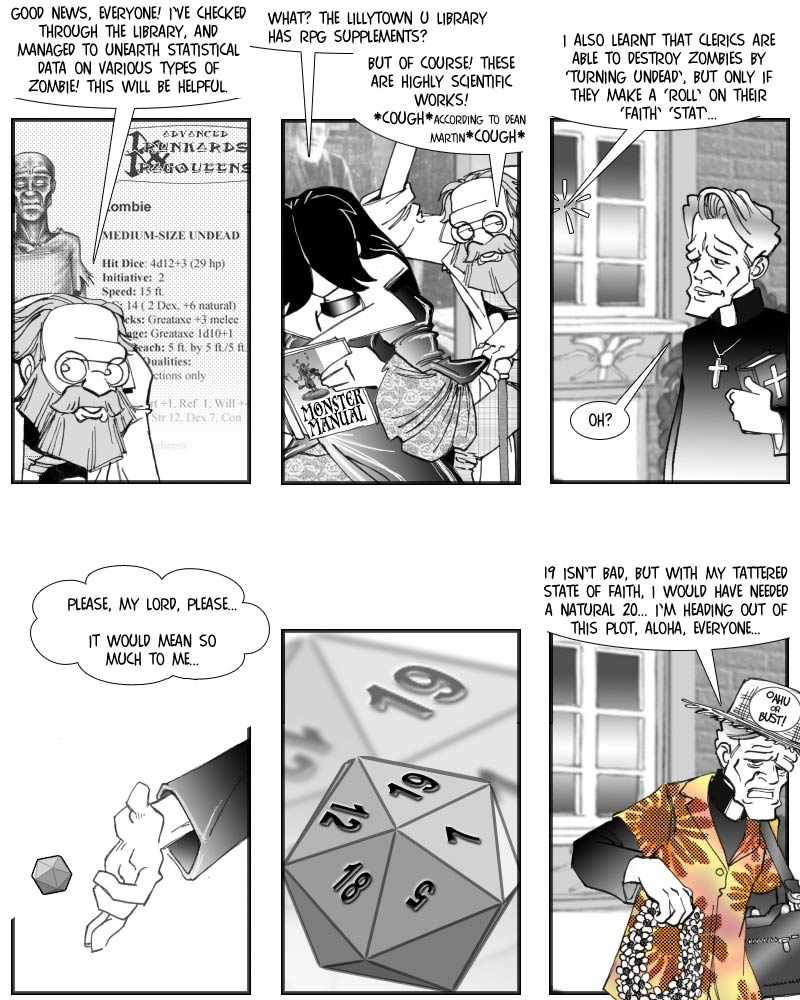 I can’t be denied that the Professor is, at times, somewhat … uh, disappointed with the Dean’s purchase policies regarding new library books. To think that he would prefer RPG supplements to the “Incomprehensible Magazine of Insanely Complex Mathematics” and the “Mind-bending Journal of Thought Experiments Related to Philosophical Repercussions of Potential Future Discoveries in Theoretical Physics”… The real-life Dean Martin, coincidentally, also wasn’t that fond of books, and publicly admitted to only ever having read a single one. He did, however, enjoy comics – the true sophisticate’s choice of literature!

As far as Father McKenzie is concerned (uh…if that’s his name – I guess I’ve stated different names for him at different times), he seems to be a bit out of favour with his deity at the moment. In keeping with the RPG theme, perhaps he should go on a quest, rather than to Hawaii. But then – faith is a gift, and if one can do nothing but wait, Hawaii seems like an excellent choice of locale.

What it comes down to is that, at the moment, no clerical intervention will be forthcoming in dealing with the little undead issue that has popped up. I’m pretty confident, however, that we haven’t seen the last of Father McKenzie, regardless…

For panel five, I originally looked online for some pic of a d20 with 19 up, but every pic I could find had the 20 up. Geeks. =P

And another news item has made it into a new voting incentive, re-featuring a recent guest star. More on Monday.