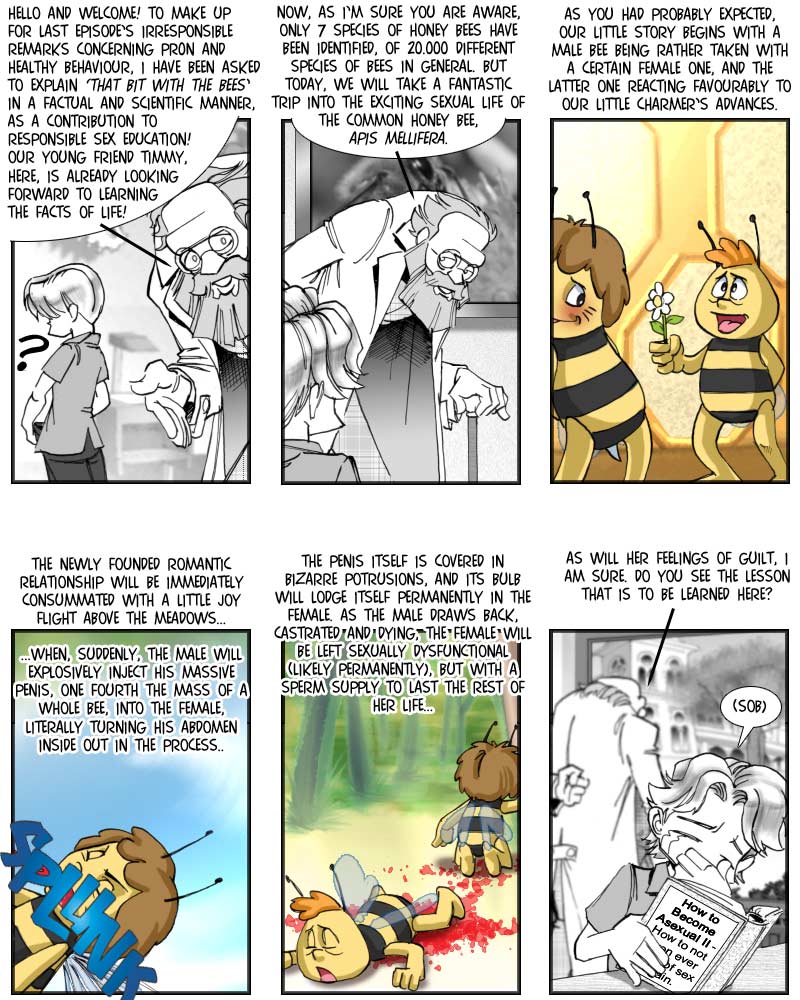 The truth is gross, isn’t it? It’s really strange – I’ve always been hearing how the behaviour of the Common Honey Bee would make an ideal metaphor to gradually and carefully introduce youngsters to sexual issues. But wouldn’t it make more sense to lecture them on normal, human sexuality first, before confronting them with the countless perversions of the Animal Kingdom? Seriously, I fear little Timmy might develop some kind of trauma from all of this…but traditions are traditions. You have to explain these things with bees, and a Professor in a movie can never lecture directly to the audience – he has to explain it to a bright-eyed young boy, who has to have blond, neatly parted hair. (Yes, Timmy has bright eyes. They just aren’t visible, since he’s portrayed by Lee.) For his benefit, I at least left out the ‘flowers’ bit, because that’s actually even grosser.

The way the bees are represented in panels three to five … well, I just can’t imagine them any other way. Call it one of my childhood traumas. (I had that terrible theme song stuck in my head all the time I was working on this.) And when I drew it, I didn’t even recognize how ironical it is to have on bee present a flower to another one…

Since Timmy’s hand is obscuring a part of the book’s title: The full title is ‘How to Become Asexual II – How to not even ever think of sex again.’ It’s a sequel to the very successful book Timmy was shown reading the last time he showed up, and contains many thought-provoking ideas about baseball. Uh…and Timmy is used to reading manga in the original right->left pattern, that why he got the version of the book with the cover on the right. That’s totally intentional, and in no way a mistake I made with mirroring, because I never make mistakes.

And I posted a new voting incentive, a new installment in the truth behind the news series, featuring somebody who’s been seen before, around those parts. More on Monday.