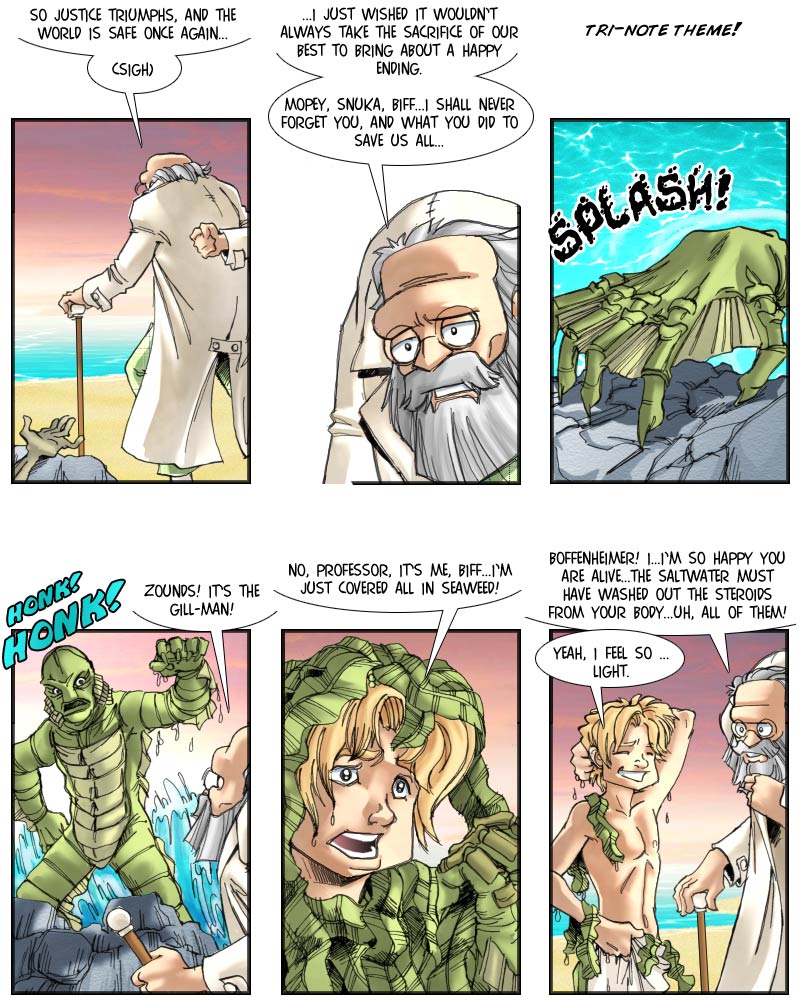 Well, you know, in B-movies death is never quite as final as in real life. Since they never found his body (if you discount that encounter with that one trawler (what remains of an encounter after you’ve discounted it? An en-er? (do I use too many nested parentheses? You bet I do.))), I’m sure his untriumphant return doesn’t really come as much of a surprise to anybody. At most, a B-movie will handwave such a seemingly impossible survival away with some stock phrase like “You can’t kill (name) that easily!” – at the other end of the spectrum, a character whose body was found in several places will suddenly turn up again without eliciting more of a response than “Hi.” In “Son of Frankenstein”, Ygor was shot several times in the chest, and his obviously dead body was inspected by the police – at the beginning of the next movie (“Ghost of Frankenstein”, if I recall correctly), the Villagers actually expect him to still be alive, because “You can’t kill Ygor that easily.” Naturally, they turn out to be right.

But Biff hasn’t just survived, he’s also shrunk back down to normal size – and even a bit further. (Naturally, the Professor immediately draws a scientifically sound explanation out of his a…uh, out of thin air.) Seems that without artificial enhancement, Biff’s body isn’t quite that athletic – he’ll probably still be able to keep his position on the team, though. Lillytown U’s student body is mostly student bodies at the moment, so competition can’t be all that stiff right now. With most of the frat boys fragged and the jerks turned to jerky, I guess Biff will also automatically advance to leadership of all the frats on campus – he’ll have the complete greek alphabet on his sweater.

Yeah, I know, being covered in seaweed wouldn’t really make you look like the Creature from the Black Lagoon, but in B-movies such illusions are commonplace. They work both ways – either characters get clobbered to death over the faintest of resemblances to some monster, or a character’s encounter with a real monster is not believed by others because it was likely just such an illusion. (Grown-up: “It was probably just a weather balloon”. Kid: “Do all weather balloons carry little green men who can embark to anally probe livestock?” Grown-up: “Uh, sure. They do it to measure methane emissions, I bet.”) The kind of obstinate policemen common to B-movies are particularly fond of dismissing reports of a rather disquieting nature by explaining them away with something rather less disquieting. I wonder how they ever justify arresting anybody, if they place that little trust into eye-witnesses.

(The Professor is looking a bit off-model here, that’s because this strip was drawn quite a while ago – it belongs to the original draft of the chapter.)